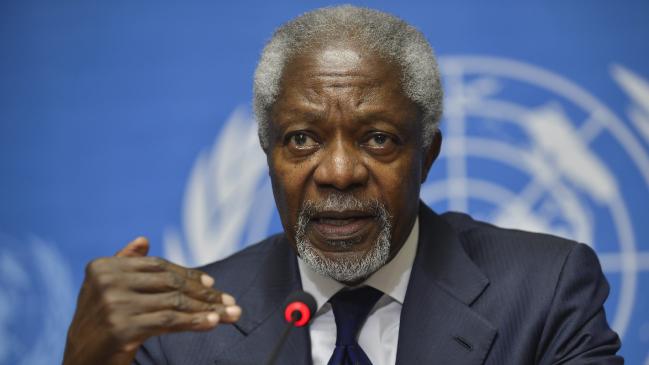 Mr Annan died in the early hours of Saturday in Switzerland after a short illness, according to a statement issued by his family.

The Nobel Peace Laureate was the seventh Secretary-General of the United Nations from January 1997 to December 2006, and became the first black African man to take on the top job as the world’s top diplomat.

It is with immense sadness that the Annan family and the Kofi Annan Foundation announce that Kofi Annan, former Secretary General of the United Nations and Nobel Peace Laureate, passed away peacefully on Saturday 18th August after a short illness… pic.twitter.com/42nGOxmcPZ

The United Nations Migration Agency also confirmed his death in a tweet, saying: “Today we mourn the loss of a great man, a leader, and a visionary: former @UN Secretary General @KofiAnnan. A life well lived. A life worth celebrating.”

Mr Annan was born in Kumasi, Ghana, on April 8, 1938. He studied at the University of Science and Technology in Ghana and completed his undergraduate work in economics at Macalester College in St. Paul, Minnesota in 1961.

From there he did his graduate studies at the Institute of International Affairs in Geneva, and in 1972 earned a Master of Science degree at the Massachusetts Institute of Technology’s Sloan School of Management.

He is fluent in English, French and a number of African languages. He went on to meet his wife, Nane, and they had three children Ama, Kojo and Nina.

He was the first Secretary-General to be apppinted from within the organisation’s ranks. He first joined the UN in 1962 as an administrative and budget officer with the World Health Organisation in Geneva,

He later served with the Economic Commission for Africa in Addis Ababa, the UN Emergency Force (UNEF II) in Ismailia, the United Nations High Commissioner for Refugees (UNHCR) in Geneva.

Before he went on to be Secretary-General, he was Under-Secretary-General for Peacekeeping. Mr. Annan also served as Special Representative of the Secretary-General to the former Yugoslavia (1995-1996), and facilitated the repatriation from Iraq of more than 900 international staff and other non-Iraqi nationals (1990).

Mr Annan pushed for reform to rebuild the United Nations and make it more effective.

He made sure that UN peacekeepers had more resources. In 2005, Member States established two new intergovernmental bodies: the Peacebuilding Commission and the Human Rights Council.

Mr Annan also had a pivotal role in setting up the the Global Fund to fight AIDS, Tuberculosis and Malaria, the adoption of the UN’s first-ever counter-terrorism strategy, and the acceptance by Member States of the “responsibility to protect” people from genocide, war crimes, ethnic cleansing and crimes against humanity.

His “Global Compact” initiative back in 1999, has become the world’s largest effort to promote corporate social responsibility.

In 1998, he helped to ease the transition to civilian rule in Nigeria. In that same year, he went to Iraq to try and solve a breakdown in talks with the Security Council in relation to weapons inspections to avoid further war and destruction.

In 1999, he was a key figure in helping Timor-Leste gain independence from Indonesia.

He was the diplomat behind certifying Israel’s withdrawal from Lebanon in 2000, and in 2006, his efforts helped bring peace between Israel and Hezbollah.

Mr Annan received the 2001 Nobel Prize for Peace. He has also received numerous honorary degrees and many other national and international prizes, medals and honours.

Mr Annan’s role as an advocate for human rights did not stop. He helped negotiate an end to violence in Kenya that killed 1,220 people after the African nation’s December 2007 election. He also went on to work within the Kofi Annan Foundation as Chairman. He was also chair of The Elders, the group founded by Nelson Mandela.