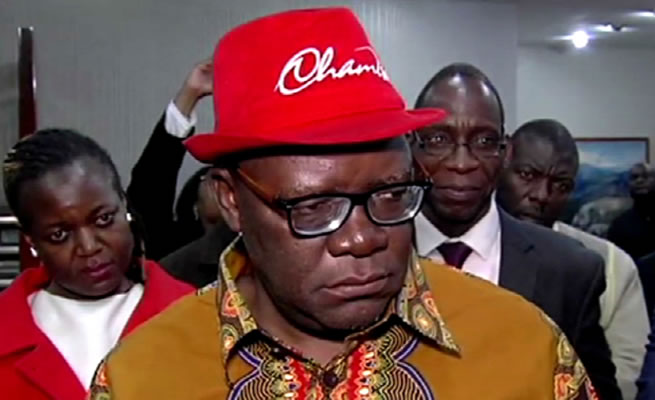 Zambian authorities on Thursday deported top Zimbabwe opposition figure Tendai Biti in defiance of a court order after he tried to claim asylum, his lawyer said.

“They have defied the court order to allow him to seek asylum and as I am speaking to you right now he has been handed over to the Zimbabwean police,” lawyer Gilbert Phiri told AFP.

Biti, a veteran figure in the opposition Movement for Democratic Change (MDC), fled to Zambia on Wednesday, reportedly facing charges at home of inciting post-election violence.

Zambian authorities swiftly refused him asylum, but Phiri said Biti’s legal team had managed to challenge the decision, keeping him there. But authorities have now ignored the ruling and deported him back to Zimbabwe, Phiri said.

“He is on the Zimbabwe side,” Phiri confirmed. “This is really embarrassing.”

“I am saddened obviously if that is the case. Zambia can certainly do better than that,” MDC lawyer Denford Halimani told AFP when asked about the deportation.

Meanwhile, Zambia’s Minister of Information and Broadcasting Services and Chief Government Spokesperson, Dora Siliya has said that her government denied asylum to Tendai Biti because there is no threat to the lives of citizens. She also said that the country was stable and that the elections had been declared to be free and fair by Sadc. However, she did not explain why the Zambian government had defied a court order from its own High Court and handed over Biti to the Zimbabwean authorities.

Zimbabwean authorities have yet to respond to requests for comment.

Mugabe’s successor President Emmerson Mnangagwa was declared the winner on Friday by a narrow margin — results the opposition have furiously contested, alleging fraud.

Biti, an internationally-respected finance minister in Zimbabwe’s troubled 2009-2013 power-sharing government, had proclaimed victory for the opposition before the final results came in.

According to Zimbabwe’s state-run Chronicle newspaper, he is among nine suspects sought for inciting protests over alleged rigging which turned deadly.

Mnangagwa, who is seeking to reverse Zimbabwe’s economic isolation and attract badly needed foreign investment, had vowed the elections would turn a page on Mugabe’s repressive 37-year rule.

Mnangagwa won with 50.8 percent of the vote, a knife-edge 0.8 percent above the threshold to require a run-off against MDC candidate Nelson Chamisa who won 44.3 percent.

The MDC claim the ruling ZANU-PF party won through “mammoth theft and fraud” and have vowed to challenge the results in court.

“Those results represent a total negation of the will of the people,” MDC lawyer Thabani Mpofu told reporters in Harare on Wednesday, charging that the results “grossly mathematically fail to tally”.

Mpofu said the MDC would reveal “a secret weapon” in court, but analysts said the challenge was highly unlikely to overturn the declared results.

International monitors praised the conduct of the election itself on July 30, although EU observers said Mnangagwa benefited from an “un-level playing field” and a degree of voter intimidation.

As Biti returned to Zimbabwe, a hearing at Zambia’s High Court, where he was supposed to appear, will go ahead Thursday in his absence, Phiri said.

Zimbabwe and Zambia enjoy strong bilateral relations, with Mnangagwa visiting in January, two months after he took over from Mugabe as ZANU-PF leader.