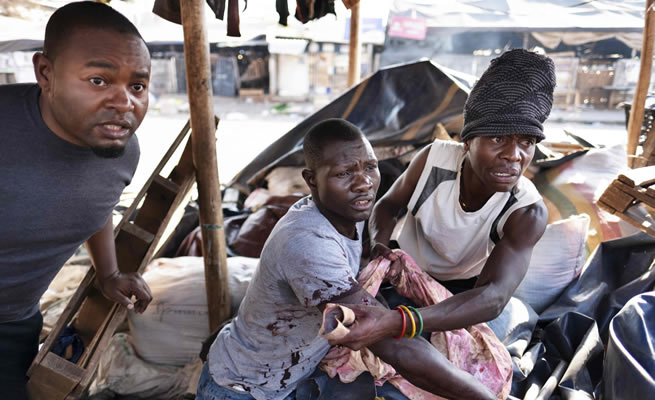 Security agencies continued a crackdown on opposition activists in Zimbabwe on Sunday, less than three days after historic presidential elections won by Emmerson Mnangagwa, the leader of the ruling Zanu-PF party.

Human rights groups reported dozens of abductions, beatings and rapes carried out by unidentified men overnight in the centre and north-eastern areas of the former British colony.

The wave of repression began on Friday night with the army moving through neighbourhoods in Harare, the capital, and satellite towns, targeting supporters and officials of the opposition party, Movement for Democratic Change (MDC). An MDC spokesman said thousands of its members were now in hiding.

“The nature of an abduction means we can’t tell who has gone, but we have lots of people missing. We have helped five people who narrowly escaped abduction to flee Zimbabwe. Others we are hiding in safe houses. There is intimidation and atrocious treatment of people who they catch,” Nkululeko Sibanda, an MDC spokesman, said.

On Monday, millions voted in the first election since Robert Mugabe, now 94, was ousted last November after 37 years in power. The rise in violence since has come as a huge disappointment to those who hoped the brutality associated with Mugabe’s rule would disappear with him.

Mnangagwa told journalists on Friday night that he had been freely and fairly elected.

Sibanda said the repression over the weekend was the worst he had experienced in nearly 20 years as an activist. “This is at an astonishing level. It is worse than under Mugabe,” he said.

Unidentified men armed with axes and firearms forced their way into the homes of known opposition supporters in Harare during the early hours of Sunday morning.

Relatives of Happymore Chidziva, an MDC youth leader, were questioned, then transported to a disused factory where they were badly beaten before being dumped at a roundabout.

“Last night six guys entered our premises. Three stayed outside. They wanted to know where Happymore was. I told them I didn’t know. They took us in their vehicle to [offices] and beat us,” Jethro Matanga, a victim of the attack, told the Guardian.

The homes of at least two senior MDC leaders, both parliamentarians, have been surrounded by armed groups during the night, and relatives harassed.

Other raids were carried out in Marondera, in the province of Mashonaland East, where several young men were reported as missing, and in Manicaland province, where one MDC activist reported that she and her husband were both raped by unidentified men who broke into their home on Sunday morning, according to consistently reliable human rights activists.

There was no independent confirmation of the claim.

Cornelius Gutha, a spokesman for the MDC youth league, said the party was working to confirm reports of abductions and attacks in the south and west of Zimbabwe.

The election day was peaceful, but seven people were shot dead two days later when soldiers opened fire on MDC protesters in the centre of Harare.

On Thursday, 22 activists were arrested at the opposition party’s headquarters by police. They have been charged with inciting and engaging in political violence. The women among them have been sent to Harare maximum security prison. The men are being held in Harare remand prison.

Mnangagwa, who hopes to attract private investors to Zimbabwe, has made strenuous efforts to improve the image of Zanu-PF, long seen as Mugabe’s political vehicle.

A spokesperson for the military said no soldiers have been deployed in any residential area to beat up people at night or at any time of the day.

“If there are any individuals masquerading as our members committing crime, these might be criminals bent on tarnishing the image of the Zimbabwe Defence Forces,” the spokesperson told local media.

The police did not turn up to a press conference they themselves had called on Sunday afternoon. After waiting 90 minutes, international and local media walked out in protest.

On Friday, riot police broke up a press conference organised by the MDC at a hotel in central Harare.

Authorities in Zimbabwe need international legitimacy to obtain the multibillion-dollar bailouts required to avoid economic breakdown. The high-profile violence is a serious setback and some say the crackdown suggests splits within the ruling elite.

Mnangagwa said on Friday that freedom of speech was an indispensable part of the “new Zimbabwe”. “We won the election freely and fairly, and have nothing to hide or fear,” the veteran of the ruling party said.