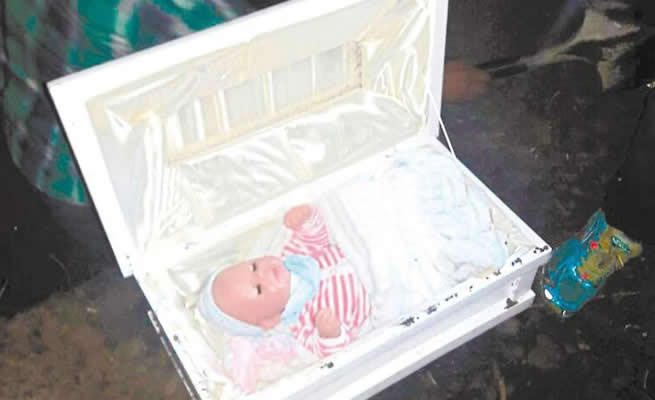 A WOMAN who faked a pregnancy for nine months took her scam a step too far when she held a funeral for a dead child that never existed.

According to The Mirror, Rosa Castellanos Diaz from El Coyolar in central Honduras told her hubby Melvin Mendoza that she was pregnant with twins.

Finally her due date arrived, and on 27 July she took a bus from her village to the Honduras' capital Tegucigalpa. She said she was going to Escuela Hospital to give birth to her twins.

That night she phoned Melvin with the shattering news that one of the twins had died in childbirth.

The heartbroken dad and their families set about organising a wake and waited for Rosa to get back.

She arrived on Saturday, carrying the child’s small white coffin. She said the hospital had sealed it and she was forbidden to open it.

She also said that the surviving twin was being cared for in hospital.

Mourners gathered at the wake through the day. In the late afternoon they formed a funeral possession to the cemetery to bury the baby in the tiny white coffin.

Dad Melvin was reportedly so overcome with sorrow he had to be physically supported as he lowered his dead child into the ground.

But some of Melvin’s friends smelt a rat.

Ismael Mejia, told Honduras' El Heraldo newspaper: "The whole thing didn't seem right. So in the night we went to the cemetery to dig it up. When we pulled out the box, to our surprise what we found inside was a doll, dressed up as if it were a child.

"We took the coffin to the police so they could see that we didn't take the child out of the box and replace it with a doll."

Melvin decided not to press charges against Rosa, but it’s not clear if their relationship will survive the cruel trick.