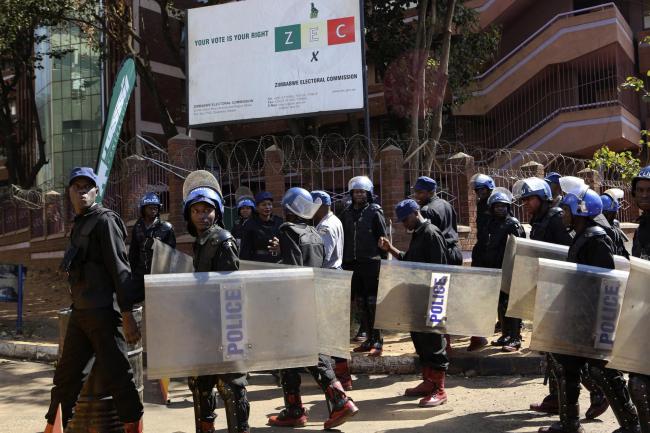 AFP is reporting that there has been a fatality amid protests from MDC-Alliance supporters against news that Zanu-PF is likely to win the election by a landslide.

Soldiers have fired live round in the capital.

“At this crucial time, I call on everyone to desist from provocative declarations and statements,” he said on Twitter. “Now is the time for responsibility and above all, peace.”

Zimbabwe police Wednesday fired water cannon and teargas at opposition supporters outside the electoral results headquarters in Harare, an AFP correspondent witnessed, as tensions erupted over alleged fraud in the election.

Officers had been facing off through a locked gate against protesters who brandished opposition party banners, lit fires and chanted slogans against the ruling ZANU-PF party.
AFP

An official said on Wednesday that the Zimbabwe Electoral Commission will be beginning the announcmement of presidential election results from 12:30pm

This comes after main opposition candidate Nelson Chamisa accused the ruling party of trying to steal the general election.

Results will be given for each of the country’s 210 constituencies, meaning a final result will only be reached after a slow process.

Reports coming out of Zimbabwe earlier on Wednesday made it clear that it is clear that Zanu-PF candidates have done enough to pass the majority mark of 106 to take control of the country’s parliament.

The opposition leader, however, continues to cry foul and believes he has done enough to win the popular vote and the presidency.

Zimbabwe’s government warned election candidates on Tuesday they faced prosecution and jail for prematurely announcing results of landmark polls after the main opposition MDC party said it had won.

“As a government we have noted with concern the actions and conduct of some political party leaders… who are openly declaring that they will announce results irrespective of provisions of the law,” said Home Affairs Minister Obert Mpofu at a media briefing in Harare. “I am sure no one wants to provoke the wrath of the law and risk being sent to jail.”

Below is the second update of election results.