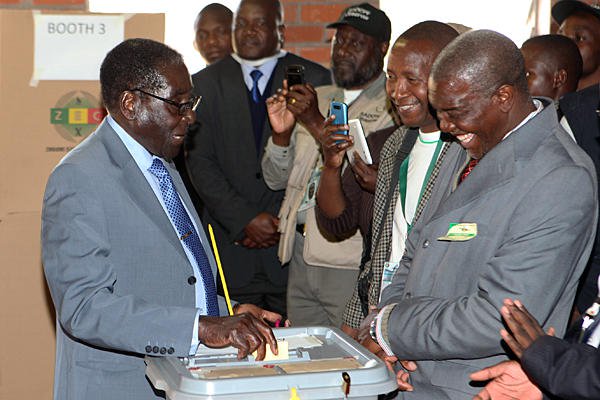 The former Zanu-PF strongman unexpectedly declared he wouldn’t be voting for his ‘tormentors’.

On Sunday he said he would not vote for those “who have tormented me”, the Zanu-PF.

It was the first time that Mugabe had spoken about his choice on the candidates – Zanu-PF’s Emmerson Mnangagwa, 75, and 40-year-old Nelson Chamisa of the MDC Alliance.

Mugabe said he had not met Chamisa and had never worked with him. He said he wished whoever wins well.

The former president, however, said Chamisa “seems to be doing well”.

Mugabe, who was removed after the intervention of the army in November, pleased for “constitutionality”, which many commentators called “ironic”.

Mugabe said a lot of Zimbabweans were afraid and they were sending him messages to say so. Mugabe said his party had taught its cadres that “politics leads the gun” but now it was “the gun leading politics”.

“Let tomorrow be the voice of the people saying this and never again …,” said the ageing former leader in apparent reference to the use of the military by Mnangagwa to come to power.

Mugabe and his wife Grace have recently complained that they haven’t given the kind of money they were expecting following his forced retirement.

Half of patients being treated or giving birth at SA hospitals are illegal foreigners:...

General News Njabulo Maseko - 18 May 2022 0
The Department of Health is conducting a study on the treatment of foreign nationals at South African health facilities after it emerged that at...

General News Sharon Banda - 17 May 2022 0
The South African Revenue Service (SARS) is owed R190 billion by thousands of entities and individual taxpayers. This was revealed by finance minister Enoch Godongwana,...

General News Skhumba Hlongwane - 17 May 2022 0
There are nearly 200 000 Zimbabweans in South Africa who are living on borrowed time. They are in the country on a special visa, the...