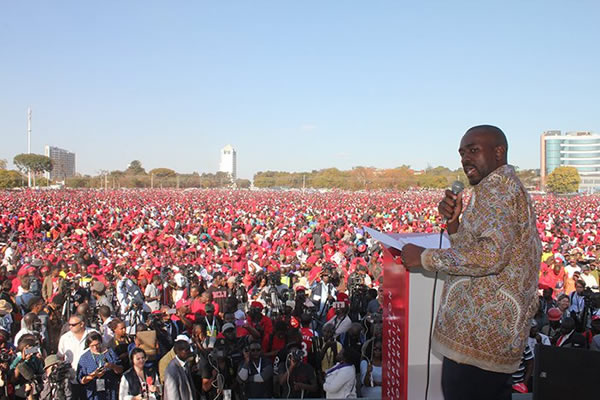 A massive MDC-Alliance rally took place in Harare on Saturday without intimidation from Zanu-PF.

Many of the city’s residents are still sceptical that this means the opposition party will win Monday’s election.

Nearby, Zanu-PF, the party that has ruled Zimbabwe since independence in 1980 also held a rally. One thing is certain: for the first time since independence — the end of white-minority rule — Robert Mugabe will not be the president after an election.

We leave it to readers to estimate the size of the MDC Alliance rally at Freedom Square using the top photo on this article.

The party’s leader, Nelson Chamisa, addressed a crowd wearing colourful red T-shirts and berets. Some stood on top of cars and trucks. Others climbed trees to get a better view. Harare residents say this is the first time the opposition has freely held a rally in the city centre without state security hindering it.

Not far from there, Zanu-PF also held a rally at the National Sports Stadium. It was comparable in size to the opposition one. But in past elections ZANU rallies have swamped MDC ones, the latter being sabotaged.

Across the city, trucks could be seen carrying both Zanu and MDC supporters singing freedom songs as they went to their different rallies. Other supporters walked on foot in their regalia.

Roads were jammed with many desperate to go to the rallies.

“This is historic in the history of opposition politics. Supporters are freely standing for their party with no disturbances,” said David Nhamo. Nhamo did not want to disclose his own political affiliation although he says he will be voting come Monday.

“In the past police would be all over the place, tear-gassing and beating even us ordinary people who prefer to go about our normal business.”

Nhamo, who sells bananas and airtime at a street corner, says he wants to see a new Zimbabwe with equal opportunities for all after the election.

Big opposition numbers do not necessarily mean that an opposition party will win the election or that real change will come to Zimbabwe, says Tendai Marufu, a money lender at a bus terminus.

“MDC has proved to be real competition against Zanu-PF, but we were disappointed when the opposition did not win in 2008. I prefer not to be overexcited.”

Marufu, who displayed a stack of cash in his hands for lending, said he preferred to continue with his business while observing Zanu-PF and MDC Alliance supporters as they went past.

“Time is money. What really matters is my X and where l will put it.” But Marufu worries about the future of Zimbabwe.

Mai Joice rides an ice cream and juice tricycle. She says she did not even register to vote. She says she hardly has time for anything else as she works Monday to Sunday to support her five children.

“What difference will it make if l vote anyway? The most important thing right now is that my children need to eat.

“l wish to see the day when real change will come to Zimbabwe,” she said.

Meanwhile, the Zimbabwe Electoral Commission has said that the elections will run smoothly.