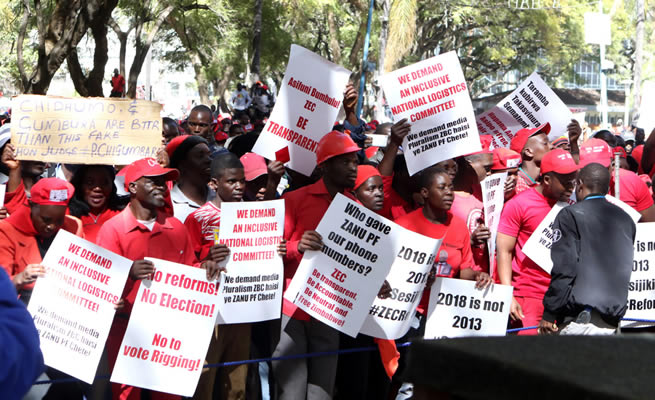 The rumours are swirling around the WhatsApp groups. One of the latest is that an “enormous Russian cargo plane” landed on Thursday at the Harare airport. The messages on the phones are that these will be the “real” ballot papers, all “premarked” for Zanu-PF and its candidate, Emmerson Mnangagwa, 75.

There are many rumours about the voters roll, some of them accompanied by astonishing statistics of shockingly sloppy data capture. Some analysts say this is an opportunity for cheating.

The new voters roll is the main objection about the pre-election period by the opposition MDC Alliance candidate, Nelson Chamisa.

What can be said about the roll is that however imperfect it may be, it is the best roll, or least worst roll that Zimbabweans have seen before. And this time, people can only go and cast their vote at a specific, predetermined polling station, to cut down on fears of double voting.

The phones started bleeping on Thursday as voters were informed about which polling station they should attend.

On Saturday, Chamisa will have a gigantic rally in the same place where founding president Morgan Tsvangirai always addressed crowds for the last time before voting begins.

Tsvangirai died in Johannesburg in February and under some controversy, and bits and pieces of intraparty violence, Chamisa, 40, became the MDC Alliance’s presidential candidate. He has run his campaign with almost no resources, addressing several rallies a day.

Earlier this week, jovial Zanu-PF candidate, Emmerson Mnangagwa held a rally in a remote rural area and entertained between 5000 – 7000 supporters who said this was the first time they had seen him since the soft coup d’etat last November which ended Robert Mugabe’s disastrous rule.

The rally, about 120 km south of Harare, in the middle of a peasant farming area, was supremely well organised. Zanu-PF has been fighting elections for 38 years. It has everything. Gigantic billboards, full page paid for advertisements in all the main newspapers, gifts for those attending rallies, such as scarves, caps, posters, and ice creams.

Its amplification system is first class and it has its own stock of banquetting tents for VIP’s, a huge stage with a roof which knocks down and is packed up into its massive delivery van, and of course, the candidate, who is also the sitting president arrives by helicopter, and is then driven the short distance from the landing spot in his official 'Zim 1’ bullet-proof Mercedes Benz 4 x 4 to the people waiting and singing for him.

And of course, there are masses of police, sniffer dogs and two drones.

Fair enough since a grenade was thrown at him at a rally last month which killed two aides and injured more than 40.

The partisan Zimbabwe Broadcasting Corporation, ZBC, had an outside broadcast unit recording this rally and an outside screen for those who could not see Mnangagwa’s face in the shade of the heavily curtained and decorated the central stage.

Mnangagwa sings to the crowd in front of him and is praised by a traditional healer and a veteran from the 1970’s liberation war. He grins and makes snide jokes and voices threats about Chamisa. But it’s not said in a grim way, and there is no hatred in his speeches.

He doesn’t slag off Mugabe’s old enemies, the British. He desperately wants reconnection so he can access loans from international financial institutions, such as the International Monetary Fund.

Mnangagwa is massively popular nowadays, mostly because he delivered Robert Mugabe to retirement and in this area at least, Zanu-PF has been a factor in their lives since the 1970’s war to end white minority rule.

He previously lost two elections against the MDC candidate and his constituency was then redrawn and he won. But then he was standing for parliament, not the presidency he so desperately desires.

Despite the serious shortage of foreign currency, Zanu-PF has bought many new double cabs and bakkies which it has decked out in party regalia. At the end of the rally, half a dozen massive, open-backed delivery vans are on hand to transport many of his supporters to their remote rural homes. They all had a happy day out from the dry and cold winter months just week ahead of spring planting of groundnuts and maize.

At the last elections, the MDC won 37 seats to Zanu-PF’s 159 which gave the ruling party a two-thirds majority. That difference widened when the forever arguing MDC expelled 20 of its MP’s.

Many say the voters roll at that election was massively manipulated but no one is able to say exactly how that would have been done.

A couple of hundred km further north, Nelson Chamisa is standing on a small podium which fits on the back of a small, borrowed truck. His microphone and amplification are of poor quality, and there are hardly any MDC posters anywhere. No gifts, no placards, but somehow thousands of supporters have found something red to wear and managed to get there. They are in ecstasy as this young politician, with nearly 20 years inside the opposition party’s inner circle, beats his drum about how he will deliver Zimbabwe from poverty, wrecked infrastructure and disgrace.

His rallies are never captured by the public broadcaster’s outside unit: sometimes a cameraman with a vehicle is there, but mostly it is someone with a hand-held camera. The ZBC does run bits of Chamisa's rallies, but the “public broadcaster” is as it ever was, in conflict with its mandate, the only TV channel in Zimbabwe.

The news bulletins on the ZBC’s four radio stations are just as bad: there is no privately-owned radio channel either. The public media is not public, it is controlled by Zanu-PF. But that doesn’t bother Chamisa much. He appears to ignore the daily misreporting of his speeches.

He knows that 60 percent of voters on the new voters roll are under the age of 40, and there are more urbanites now than at previous elections. Mnangagwa is clearly challenged by Chamisa’s growing support especially in rural areas where his predecessor seldom ventured.

But there is growing tension: some of that is about MDC Alliance supporters who say they will not accept it if their candidate doesn’t win. That they will go to the streets: and there are fears, of course, that the army will move in on them, or that police will arrive with tear gas.

But all Zimbabweans are free to campaign for the first time in nearly 20 years. They are not afraid, at least in urban areas, but many around the country say they still have memories of Zanu-PF violence they saw or head about.

There are thousands of observers from the EU, US, Commonwealth, SADC the African Union and various non-governmental organisations.

Zimbabwe is so changed. There is, as impressive foreign minister Sibusiso Moyo said at a press conference this week, "a new dispensation.”