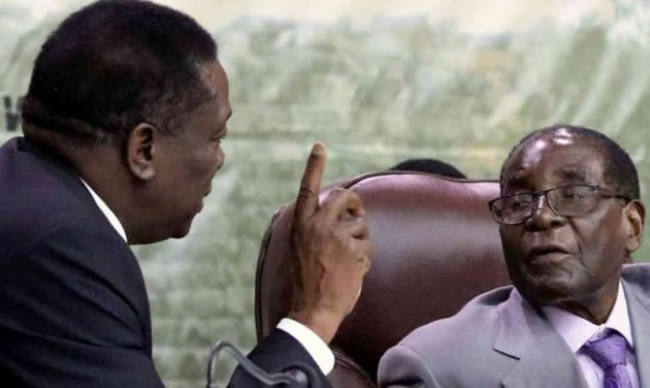 Ahead of Zimbabwe’s first post-Mugabe election, many are wondering what happened to the man who led the country for almost 40 years.

Robert Mugabe has not appeared in public since his once-impregnable regime came crashing down last November as Zimbabweans watched in amazement – and often delight – at the fall of the only leader the country had ever known. So what has happened to the frail 94-year-old who dominated the country’s daily life for nearly four decades?

LAST LIVE TV APPEARANCE
After the army briefly took power, Mugabe’s exit became inevitable – but the veteran autocrat dug his heels in with one last, defiant performance. He appeared on live television on the evening of Sunday November 19, with the world tuning in, expecting his resignation.


Mugabe instead appeared unfazed, slowly reading his speech as he pledged to stay in office – while the uniformed military generals who had taken power sat fidgeting by his side. He acknowledged the army’s “concerns” but claimed the military intervention did not challenge his authority. He resigned two days later, by letter.

SNAPPED IN SINGAPORE
On December 15, Mugabe was spotted for the first time since his fall when AFP photographed him at a hospital in Singapore on one of his regular medical visits. Walking unaided despite his advanced age, Mugabe exited a lift at the Gleneagles Hospital surrounded by an entourage and stepped into a car. A government spokesperson said the trip was part of the retirement package covering overseas travel for former presidents.

Mugabe also returned to Singapore in June for further medical attention, according to Zimbabwe media, with prostate cancer, high blood pressure and eye cataract among his reported health problems.

‘BLUE ROOF’ BIRTHDAY
Mugabe and his wife Grace are thought to spend their days in seclusion at “Blue Roof” – the sprawling luxury private residence he built in Harare’s upmarket suburb of Borrowdale.

He celebrated his 94th birthday on February 21 – a date that was marked when he was in power with grand ceremonies for thousands of guests and outpourings of praise from fawning loyalists. This year, it was a private black-tie affair for close family only. Photographs emerged afterwards of Mugabe wearing a bow tie and Grace in a red dress. Military and police vehicles are occasionally seen on guard outside the gates of the “Blue Roof”.

SPEAKING OUT
Mugabe has spoken out only once since his humiliating fall. He described his ousting as a “coup d’etat” and dismissed the generals’ claim that they intervened only to target enemies around him.

“We must undo this disgrace which we have imposed on ourselves… Zimbabwe doesn’t deserve it,” he said in press interviews on March 15, adding he did not want to return to power.

Wearing a light blue suit and appearing mentally sharp but forlorn, he expressed shock that his long-time ally Emmerson Mnangagwa had succeeded him.

“I never thought… he would be the man who turned against me,” he said, adding he thought Zimbabwe was now “topsy-turvy”.

Grace was on hand to host journalists at “Blue Roof”, handing out homemade pizza to guests. Her own presidential ambitions were widely seen as provoking the military to intervene and install Mnangagwa.

“All that is rubbish,” Mugabe said, insisting it was never his plan for her to succeed.

ELECTION GAMES?
Mugabe appeared in a carefully-staged photograph in March standing next to Ambrose Mutinhiri, a close ally who walked out of the Zanu-PF ruling party. Mutinhiri, who opposed Mugabe’s removal, set up the splinter National Patriotic Front (NPF) party to stand in the election. The photograph set off speculation that the party could be a plan for Mugabe to retain influence. But it has made little impact during the campaign and Mugabe is now far removed from politics. A member of his office declined to comment to AFP whether he would vote on Monday.