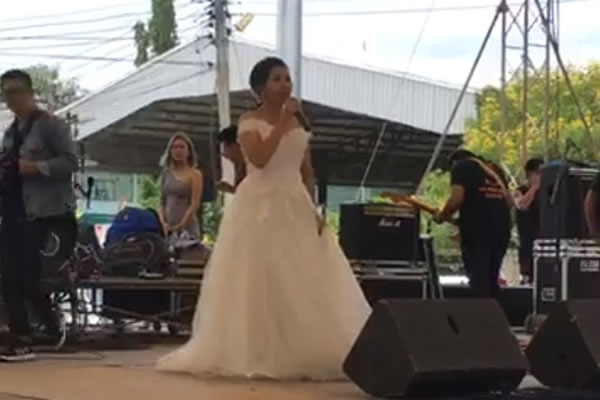 A jilted bride is receiving hundreds of sympathetic messages after live-streaming her wedding day on Facebook only for the groom not to show up.

Manow Jutathip Nimnual from Thailand and her husband-to-be Phakin Junjerm had planned for weeks for their extravagant wedding ceremony, set to take place on June 22.

But during the party, after realising that Junjerm, 20, was not going to show up, the bride decided to face the crowd and tell them herself.

In the video, Nimnual addressed the crowd from a platform and reportedly told guests she had done her best to plan the wedding and had not expected it to turn out like it did, according to the Bangkok Post.

The 24-year-old bride, still dressed in her wedding gown and veil, also thanked her guests for attending and apologised for what happened.

Since the day of what was supposed to be the wedding, the heartbreaking clip has been viewed more than five million times and garnered messages of sympathy and support.

“Keep fighting, I’m rooting for you!” one person wrote.

Prior to the wedding, the bride and groom had mailed 1,000 invites and taken pre-wedding photos that they displayed on billboards.

According to the Bangkok Post, the couple had only been dating for a short time before they decided to tie the knot.