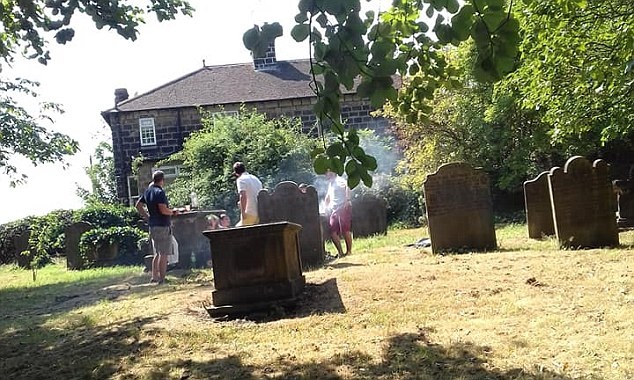 Shameless diners sparked outrage after they were found braaing on top of a tombstone in graveyard.

The actions have been branded disgraceful after a passerby shamed them on social media.

Pictures surfaced on Facebook after a user came across the group in the graveyard at Otley Parish Church in Leeds, United Kingdom.

He told Daily Mail three adults and seven children were present and that the cook was even rude to his wife when she challenged him about the gathering in West Yorkshire.

The unnamed man shared the images on Facebook, with a post reading: "A lovely afternoon spent at the Otley food and drink festival, followed by a meander home through the Parish Church grounds. Imagine the surprise to find three adults with about seven children enjoying a barbecue. The cooking was being done on the raised tomb stone."

He said that he and his wife went to challenge them, only for the chef to patronise his partner.

The passerby wrote: 'My wife remonstrated with the men. The "Chef" patronisingly said "Thank you for your input, I've taken note."

"So I took a photograph! Over trots the guy in blue and demands I delete the photographs. In any case I was taking photos of him braaing on a tomb in sacred ground."

The posts sparked outrage from social media users, with one branding it: 'The most shocking, disrespectful and dishonouring thing I have seen in a long time!! Utter disgrace!!'

Another wrote: 'Wow this is so bloody disrespectful, I can't believe anyone would even consider doing this, absolutely disgraceful.'