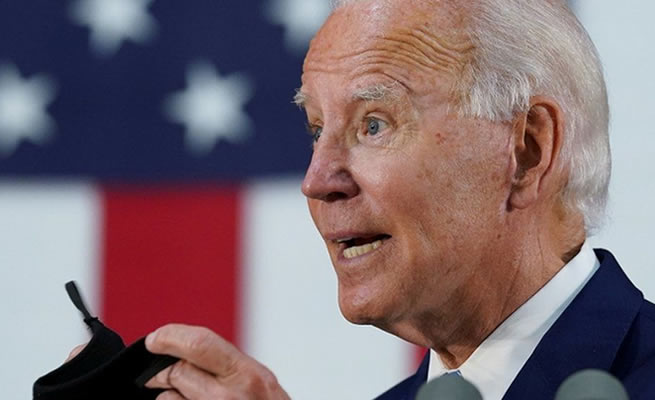 President Joe Biden tested positive for Covid-19 on Thursday and is experiencing mild symptoms, according to a White House statement.

Biden has begun taking Pfizer Inc.’s Paxlovid treatment for the disease, Press Secretary Karine Jean-Pierre said, and will isolate at the White House while continuing his duties.

The US president, who is 79, is fully vaccinated against COVID-19 and has been boosted twice. While Biden's vaccinations should protect him against serious illness, the infection is a blow to the administration's efforts to show the president is on top of the pandemic that has disrupted the country for more than two years.


Jean-Pierre said an update will be provided every day as Biden "continues to carry out the full duties of the office while in isolation" at the White House.

Close contacts, "including any Members of Congress and any members of the press who interacted with the President during yesterday’s travel," will be informed on Thursday, Jean-Pierre said.

White House officials have previously said President Biden is tested at a “regular cadence,” and he last tested negative on Tuesday, July 19.

The president returned this week from a trip to Saudi Arabia and Israel, and traveled Wednesday to Massachusetts to promote executive actions he was undertaking to address climate change.

Biden greeted Ukraine’s first lady at the White House that day and then traveled to Massachusetts on Wednesday, visibly coming in contact with multiple members of Congress, local officials and White House staff. The president was supposed to travel to Wilkes-Barre, Pennsylvania, on Thursday then to Philadelphia for a Democratic National Committee fundraiser before traveling to Delaware.

The US president will work in isolation until he tests negative, she said.

The White House had acknowledged that Biden could catch the virus as the president balanced potential risks with a return to regular activities.

"I wouldn't say it's just a matter of time,” White House COVID-19 response coordinator Ashish Jha said on April 26 after Vice President Kamala Harris tested positive. "But, of course, it is possible that the president, like any other American, could get COVID."

Biden's doctors previously assessed he could continue to carry out his duties if he contracted the virus, then-White House press secretary Jen Psaki said in April.

"He has access to the best health care in the world," Psaki said at the time.

Psaki herself tested positive in late March, months after a previous bout of COVID in October.

House Speaker Nancy Pelosi, D-Calif., who is third in line for the presidency, tested positive in April, as did three cabinet secretaries, several members of Congress, and Biden's sister.

In addition, the White House had gone beyond CDC's recommended protocols to protect Biden from the virus. Anyone who meets with the president or is traveling with him is tested first. When possible, Biden is also kept socially distanced from others, Psaki previously said.

Still, Biden makes risk assessments, “just like many Americans,” when he feels it’s import for him to travel or attend an event in person, Psaki previously said.

"And certainly, that's one of the reasons we want to be very clear that it is possible he could test positive for COVID," she said on April 26.

Beyond the vaccines he's received, Biden could further improve his protection from severe illness by taking tPaxlovid, which Harris was prescribed.

Biden is a relatively high risk for a severe case simply because of his age. On the positive side, he has no other major risk factors such as obesity, diabetes, asthma or chronic lung disease.

Biden has urged Americans to get vaccinated and to get their booster shots, stressing that those who are protected can feel safer.