Home International News Lots of jobs in Netherlands for South Africans in financial, engineering and... 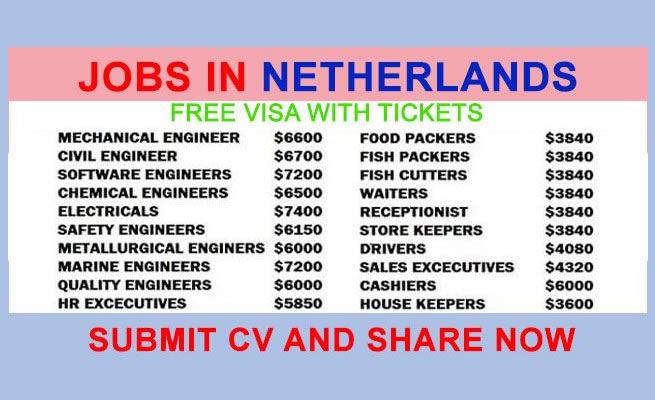 With various countries closing their borders since the inception of the Covid-19 pandemic, the Netherlands has emerged as one of the new frontrunners as a destination for South Africans seeking employment abroad to further their careers, say emigration experts.0

Data from CBS (Statistics Netherlands) shows strong growth in the number of South African immigrants in recent years, with the country named in the top 10 source markets for migration in 2021.

Not only is the Netherlands attractive in terms of their work/life balance, but the Dutch government offers tax incentives for highly skilled migrants, especially in the financial, engineering and information technology fields.

“Highly skilled South African professionals are seen as assets to foreign employers. South Africans should not be hesitant to apply for international vacancies, especially in the Netherlands,” he said.

With the economy growing at such an exponential rate during a pandemic, the Netherlands has now been facing a different type of dilemma, job vacancies are now outnumbering the number of unemployed people. This means that there are roughly 123 vacancies for every 100 unemployed people according to the CBS.

“One of the major success stories, that shows that the Netherlands is the global hub for tech, is that Dutch company ASML recently sold their advanced chipmaking tool to Intel for more than $340 million with even more orders being placed by other companies. This, in turn, will create many more job opportunities for highly skilled migrants in the financial, engineering and IT arenas,”  said Ridout.

It is not just the growing pool of vacancies that’s attractive for South Africans. The Dutch work/life balance is another contributing factor to why the Netherlands is seen as an emerging hub for skilled migrants, he said.

Tax benefits of working in the Netherlands

There is also a 30% tax ruling that is another attractive incentive for expats. This ruling is aimed at highly skilled migrants that have expertise in areas that are not easily found in the Netherlands, says advisory firm Tax Consulting SA.

“What the 30% ruling entails is that an employer may compensate you for ‘extraterritorial costs’ equivalent to 30% of gross salary untaxed. But there are certain specifications that highly skilled migrants need to meet before they can qualify for this incentive.”

According to the Dutch Tax Administration, employees must meet the following conditions –

Once the highly skilled South African has found employment in the Netherlands, important steps need to be taken to ensure that they remain tax compliant with SARS.

“The first important question that needs to be asked is whether one is going to emigrate with the intention to permanently stay in the Netherlands, or if that person will come back to reside in South Africa.

And the second vital factor is whether the person will be an employee or independent contractor. These are criteria that will determine what exemption or route you can take in terms of tax residency and foreign income,” said Victoria Lancefield, general manager for tax residency and financial emigration at Tax Consulting SA.

Foreign earnings will be taxed on the surplus of R1.25 million at the marginal income tax rate which could be as high as 45%. Even if the tax resident qualifies for an exemption, a tax return needs to be submitted.

What are your options?

Certain processes are needed to formally cease tax residency so that SARS does not come knocking on your door.

“There are two options available to South Africans thinking about emigrating,” said Lancefield.

“They can either undergo the financial emigration process if they are emigrating with the intention of not coming back to reside in South Africa, or they can apply the Double Tax Agreement (DTA) between two countries.

“The DTA route is undertaken when the professional has the intention of coming back to reside in South Africa in the future.”

It can be an arduous process to start the financial emigration or DTA process and that is why it is important for one to consult professional and experienced tax practitioners and tax attorneys to help them alleviate the tax burden while they get ready to move overseas to further their careers. – Work In South Africa