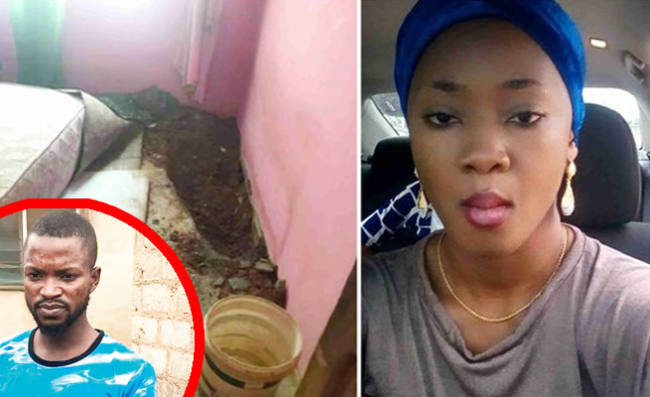 Adeyemi Alao, the suspected killer of Khadijat Adenike, the daughter of former deputy governor of Nigeria's Ondo State, Alhaji Lasisi Oluboyo, has confessed that he had sex with the corpse of khadijat for six days in his room.

Alao, who claimed to be Khadijat’s boyfriend of over five years, said he had no intention of killing his late girlfriend when he invited her to his residence at Oke-Aro area of Akure, until he met her having sex with another man in his room.

The suspected killer, who was paraded yesterday at the state police headquarters, confessed that he dug a grave inside his room in an attempt to bury Khadijat before he was arrested by the police.

Alao was arrested on Sunday, following the discovery of the corpse of Khadijat, a final year student of Adekunle Ajasin University, Akungba-Akoko, in his house by the police.

The deceased had earlier been declared missing by her parent when she could not be found by her friends in school and the parent, also, could not find her at home.

The suspect, while being interrogated, confirmed the killing of the deceased, but denied responsibility for her death, saying he met her dead inside his room.

He said the late Khadijat was notorious for sex and could have sexual intercourse with any individual not minding the status or age of the fellow.

“She called me that she was in Lagos and I asked what she was doing in Lagos. She said she was there to perfect the project she was writing. She told me she would come to visit me after leaving Lagos and she came, but, the following day she went out and returned with two boys who she claimed were his brothers. I went out one day and when I returned, I saw one of the boys she called her friend making love with her. I was furious and I beat her to pulp. The boy escaped because he threatened to shoot me with a gun in his hand,” he added.

Alao, who denied rumours that he killed Khadijat for ritual purpose, confessed that he made arrangements to bury her inside the room, having dug a grave but was eventually caught.

Commissioner of Police, Mr. Gbenga Adeyanju, said the suspected killer would face the full wrath of the law.

He said the suspect will soon be prosecuted and added that the accomplices of Alao would be arrested and also prosecuted.