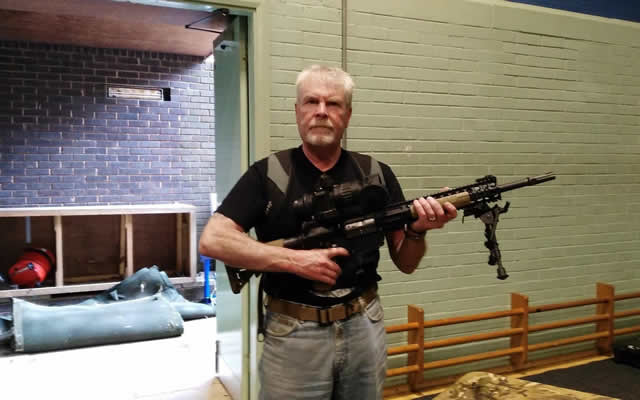 A former Ukip parliamentary candidate killed his wife after she found out he was busy having sex with their son’s long-term girlfriend, a court heard on Monday.

Former Royal Marine Stephen Searle, 64, is said to have had a two-month fling with Anastasia Pomiateeva, 39, after pestering her for sex. His wife, Anne, 62, allegedly found intimate photos the lovers had sent to each other by mobile phone.

The Searles continued living together but his cheating with someone they regarded as their daughter-in-law put ‘considerable strain’ on their 45-year marriage, the court heard. It allegedly led to a series of rows that ended with Searle suffocating his wife at their £400,000 detached home in Stowmarket, Suffolk, shortly after Christmas last year. He would have been taught the choke hold he used while he was in the Marines, the jury was told.

Prosecutor Andrew Jackson said: "This alleged murder had its roots firmly in the discovery by Mrs Searle that the defendant had been having an affair with her daughter-in-law. The prosecution case is that there was yet another row between them and the defendant strangled his wife to death."

Searle became a county councillor for the Stowmarket South ward in 2013 but lost his seat in May last year. He then contested the Central Suffolk and North Ipswich constituency in the general election but came last out of five candidates. The jury was told Searle called police at 10.19pm on December 30 and told a call handler: "I have just killed my wife."

He allegedly admitted suffocating her and leaving her body ‘between the lounge and the kitchen’, before adding: "Bit different for you tonight – Happy New Year. It’s a bit of a bizarre situation, but never mind." Asked if it was just him and his wife in the house, he replied: "Just the one of us now."

The burly father of three met Mrs Pomiateeva in 2005 when they worked at a bowling alley in Ipswich where he was manager, the court was told. She began dating his son, Gary, who worked at the same business, in 2009, and they had children together.

Mr Jackson said: "Some years later, in March 2017, the defendant began to make it clear to Mrs Pomiateeva that he had a sexual interest in her. He saw her regularly at Royal Marine cadet meetings [where he was a volunteer] because her son was a member of the cadets, and he began to send her photographs on his mobile phone of himself bodybuilding."

Searle was still a councillor at the time and on one occasion allegedly invited her to his office.

"He told Mrs Pomiateeva that he had not had sex for a long time. He asked if she was happy with his son Gary and their relationship and asked her if she would like to make him – the defendant – happy," Mr Jackson said.

The jury at Ipswich Crown Court heard that a sexual relationship began in April last year. The discovery of the compromising photos two months later was a ‘bombshell’ for Mrs Searle, who took time off from the food processing factory where she worked.

"She suspected him of having an affair with someone else but she did not know who," Mr Jackson said.

Mrs Pomiateeva confessed the affair to Gary and there was "not surprisingly… little communication" between father and son afterwards, the court heard.

On Christmas Day, Mrs Searle posted a message on Facebook which said: "Happy Christmas. I hope you are doing well. I hope I will still be here in 2018. We will see."

Mr Jackson said: "Exactly what she was meaning with these words, we can’t say. She is not alive to tell us."

Searle denies murder, claiming he was acting in self-defence.