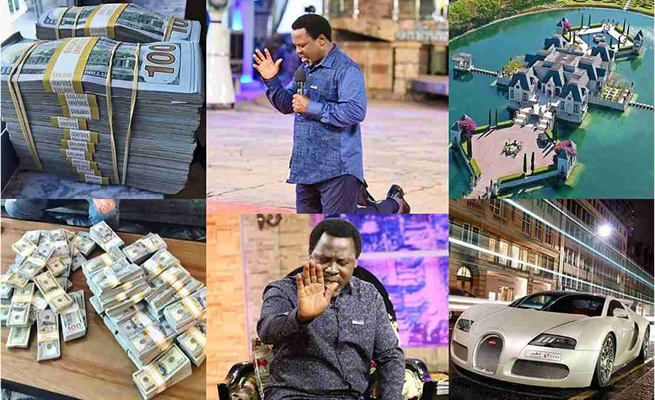 Late controversial pastor and televangelist Temitope Balogun Joshua, better known as TB Joshua, is said to have been one of the wealthiest pastors in Nigeria.

According to website Glusea, which ranks the net worth of celebrities, among others, the Synagogue Church of All Nations founder’s net worth was valued at US$150 million.

Glusea wrote that Joshua owned a private jet worth US$60 million and a fleet of luxury cars.

According to Nigerian news website Otakukart, TB Joshua was named one of Africa’s 50 most influential people by pan-African magazines The Africa Report and New African Magazine.

The news site also reported that apart from these accolades, Forbes stated that Joshua was the third richest pastor in Nigeria in 2011. The church, however, denied any such claims.

Additionally, he gained the title of the “Oprah of Evangelism” and was also known as YouTube’s most popular pastor, Otakukart reported.

Announcing the death of the pastor, the ministry wrote on its Facebook page: “God has taken his servant Prophet TB Joshua home … His last moments on earth were spent in the service of God."

Many African presidents, senior government officials, international football players, musicians and other high-profile guests worshipped in his church, according to Al Jazeera.

According to the news channel, more than 15,000 people from Nigeria and abroad would stream to his Sunday services

TB Joshua died on Saturday, June 5, after a live broadcast. He leaves his wife and three children.