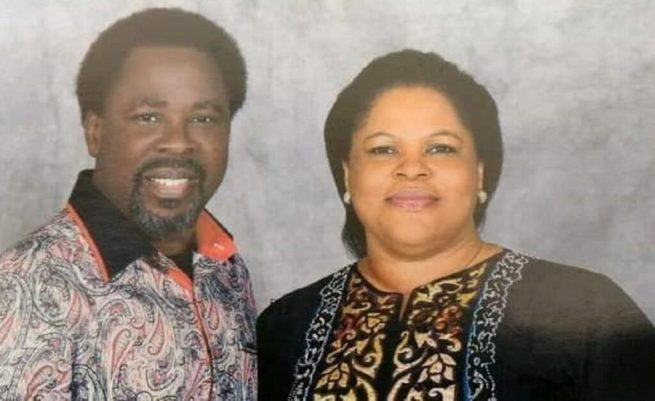 Evelyn Temitope Joshua, late prophet TB Joshua’s wife to the late Prophet TB Joshua; the founder and leader of ”Synagogue Church of all Nation (SCOAN) has issued an emotional message, following the death of her husband.

Speaking through her official Twitter account, @mama_evelyn, the late popular televangelist’s wife said losing a loved one is never easy.

“Losing a loved one is never easy; whether sudden or foreseen it’s always heartbreaking.

“Grief can wreak havoc on our overall well being.

“That’s why it’s important to stay rooted to the Almighty.

“Only He can lessen our heartache and comfort us in these times. Seek refuge in Him.”

Joshua, the founder of The Synagogue, Church Of All Nations (SCOAN), died in Lagos on Saturday evening shortly after concluding a programme at his church.

Meanwhile, following his death, The Synagogue in Nigeria has been sealed off with hundreds of residents and church members gathered at the church premises to mourn the death of Joshua, many still in shock and disbelief.

Tributes from celebrities, politicians and other clergymen have been pouring in from mainly Nigeria and South Africa where he has a huge number of followers.

Who was TB Joshua?

Temitope Balogun Joshua was the founder of the Synagogue, Church of All Nations. He was one of Nigeria’s most popular televangelists but was perhaps the least flamboyant of his peers.

Tens of thousands of people have attended his weekly services in Nigeria’s biggest city, Lagos.

His rise to prominence in the late 1990s coincided with the explosion of “miracle” programmes performed on national TV by various pastors.

TB Joshua was often mocked for lacking the finesse of his colleagues during “deliverance” sessions – an intense prayer that resembles exorcism.

His ministry professed to heal all manner of illnesses including HIV/Aids and attracted people from all over the world.

Known as the “Prophet” by his followers, he ran the Christian television station Emmanuel TV and often toured Africa, the US, the UK and South America.

In 2014, one of his churches collapsed, killing at least 116 people, including many South Africans.