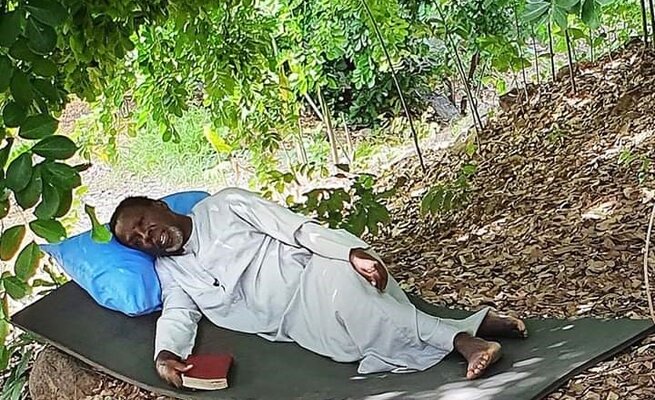 Mr Joshua, the founder of The Synagogue, Church Of All Nations (SCOAN), died in Lagos on Saturday evening shortly after concluding a programme at his church,

Family sources who did not want to be quoted confirmed the death and said an official statement was still being prepared.

The passing of my brother TB Joshua saddens me deeply. At 3.00am this morning I was told by one of his daughters that this was fake news & I tweeted as much. Sadly I was misled. 5 minutes ago the same person called me & confirmed the story. @GazetteNGR was right & I am in pain. pic.twitter.com/g6C1XhPKLB

Prophet TB Joshua’s cause of death has not been revealed after the frontline televangelist passed away in Lagos on Saturday evening (June 5, 2021) at the age of 57 after concluding a program at his church in Ikotun.

“Surely the Sovereign LORD does nothing without revealing his plan to his servants the prophets.” – Amos 3:7.

On Saturday 5th June 2021, Prophet TB Joshua spoke during the Emmanuel TV Partners Meeting: “Time for everything – time to come here for prayer and time to return home after the service.”

God has taken His servant Prophet TB Joshua home – as it should be by divine will. His last moments on earth were spent in the service of God. This is what he was born for, lived for and died for.

As Prophet TB Joshua says, “The greatest way to use life is to spend it on something that will outlive it”.

Prophet TB Joshua leaves a legacy of service and sacrifice to God’s Kingdom that is living for generations yet unborn.

As soon as the beloved preacher’s death was disclosed to Peoples Gazette by family sources, all started asking what happened to TB Joshua, a prophet who attracted many Christians from across the world by using his platform.

Temitope Balogun Joshua was the founder of The Synagogue, Church Of All Nations (SCOAN) reigned for several decades as a fiery preacher on television.

As he was kindly informed of his cast religious estate in the Ikotun/Egbe area of Lagos, Joshua’s platform, Emmanuel TV, one of Nigeria’s greatest Christian broadcast stations, is available worldwide through digital and terrestrial switches.

Some have believed that he had divine gifts and could predict events; He predicted multiple terrorist attacks committed by ISIS, Al-Qaeda affiliates. Also, Al-Shabaab protesters had been predicted by him, such as:

Although prophet TB Joshua’s cause of death was not immediately disclosed to www.celebgossip.co.za, sources on behalf of the family claimed that his remains had been deposited at the morgue and an autopsy would clarify the exact cause of death forthwith.

After a section of his church headquarters in Lagos collapsed and led to dozens’ death and many more injured, in 2014, his church was placed in the center of a multi-national investigation.

An investigation into the collapsed building kicked off but up until his passing, he was yet to be tried at the end of the investigations even though he did not accept charges of negligence and denied a trial over the case.

US day News‘ thoughts and prayers are with prophet TB Joshua’s family, friends, fans, and all of his loved ones. You can also leave a condolence message below the comment box to honor him;