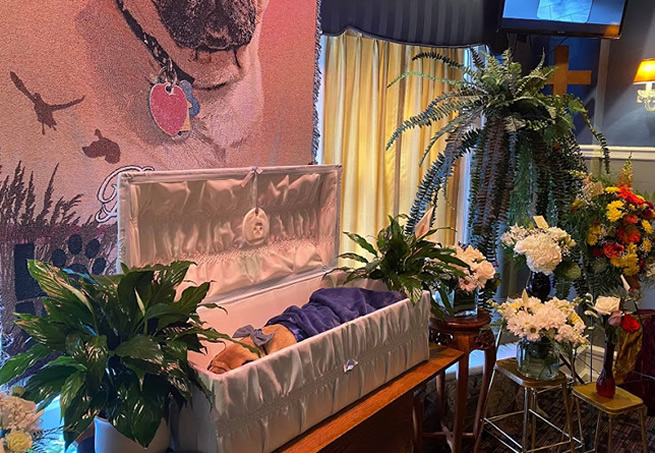 They say all dogs go to heaven — if so, Dexter is heading there in the most luxurious way possible.

The beloved pug was given a lavish send-off by its owner, US pastor Tim Beville Jr., recently.

The fancy open-casket funeral featured flowers, a screen playing a slide show of his life and a giant embroidered mural of 7-year-old Dexter, who died in late April.

Mourners also signed a book of remembrance, paying tribute to a good boy.

Those not able to attend in person could post on a virtual wall of remembrance and donate to charity in memory of Dexter.

Oh, and there was also an obituary for Dexter, in case you were wondering.

It reads: “Dexter Beville, 7, of Allentown, PA, passed away peacefully on Tuesday April 27, 2021 in my arms. Dexter was born in Bethlehem, PA, to Galaxy and the late Leinda Rockmore.

“Dexter has been a part of the family since he was 9 weeks old. There was never EVER a day that he didn't do something that would bring a smile to my face and even make me laugh out loud.”

Snaps of funeral were shared by Beville Jnr. on social media, where it got tons of reactions.