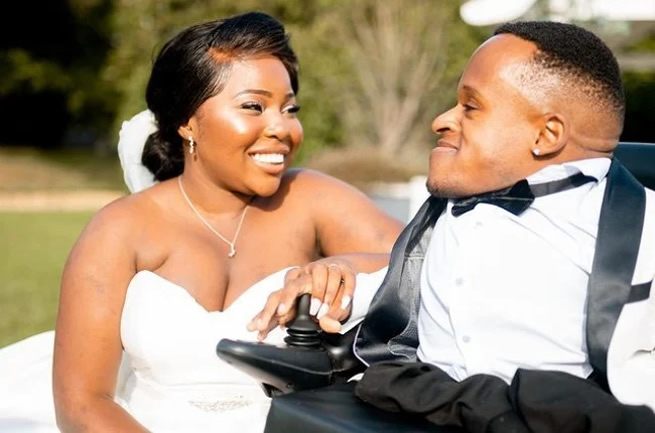 The couple on their wedding day last year. Mayfair says the more she learnt about Winston's condition, the more she was amazed by him. 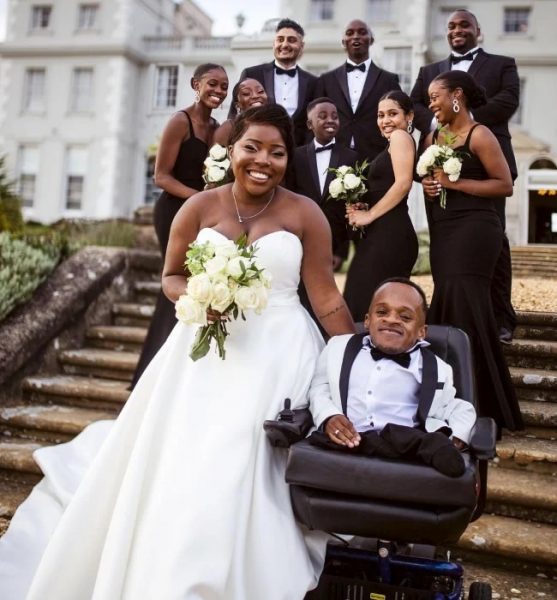 Everywhere he and his wife go, people gawk at them – but Winston Clements couldn't care less.

In fact, he welcomes the stares and gapes from strangers.

"Things like that don't bother me – I've always loved being the centre of attention,"he quips.

And thats something he's received a lot of over the years as a result of a health condition. Winston was born with osteogenesis imperfecta, a rare disorder that causes his bones to be extremely fragile and vulnerable to breaking. The condition, also known as brittle bone disorder, has stunted 34-year-old Winston's growth too – he's just under 1m tall.

In his lifetime he's suffered 200 excruciating bone fractures and was expected to live a life of isolation and pain – but that all changed when a certain young woman called Mayfair crossed his path three years ago.

The pair, who live in London in the UK, fell head over heels in love. After a whirlwind romance they tied the knot in August last year surrounded by a handful of family and friends. But their nuptials attracted more than the usual messages of celebration and best wishes.

How could an able-bodied woman be with Winston, some wanted to know. Can they have sex? Can they have kids? The hurtful questions came thick and fast.

Mayfair says she and Winston try to ignore them and focus on the positive, supportive comments, but it can be hard.

"We also receive a few negative messages suggesting we're together for financial reasons. These are all incorrect assumptions, of course."

Mayfair (23) says they refuse to let cyberbullies stop them celebrating their unconventional love.

"We choose to encourage people through our story instead," she says

"Winston is one of those guys – to know him up close is to love him," she says.

She was smitten when their paths crossed at a personal development event in London three years ago. Winston, a diversity and inclusivity activist, was a guest speaker at the function and had a personality she couldn't resist.

The couple were married in the beautiful garden of an 18th-century country house.

"The highlight was when I saw Mayfair in her wedding dress," he says. The bride was breathtaking in a sweetheart gown but it was a bittersweet moment for the newlyweds as the groom had lost his mother a few weeks before the wedding.

Mayfair penned a moving tribute in her honour."Thank you for raising the most incredible husband I could've asked for and for giving me the most amazing sisters," she wrote.

After jetting to Spain for their honeymoon the newlyweds got inked. Mark 10 vs 8 is tattooed on their wrists, referring to the biblical scripture that speaks of two people becoming one flesh.

Winston and Mayfair continue to work together side by side, sharing their journey on social media. They hope their story inspires others to believe in themselves and their dreams despite their circumstances.

"I sort of get excited when I see the trolls come out," Winston says

"When you find your purpose, it's really uncomfortable for people who are acting outside of theirs."

Mayfair, who was training to be a life coach, was so inspired by his motivational speech she reached out to him to start a group to support fellow entrepreneurs.Winston was easy to talk to, so she didn't find it surprising when the conversation turned personal.

Soon they started telling each other things they'd never shared with anyone else and had conversations that lasted several hours.

"Winston told me he was in love with me. I didn't want to say it at the time, but I felt the same"

Mayfair admits she had some reservations about dating a guy in a wheelchair but the more she learnt about his condition the more she fell in love with him. Her husband's early years were particularly tough.

Winston's childhood was clouded in pain and trauma because he was breaking a bone "every other month", he says. While his two sisters and their friends went about their days with ease, Winston struggled with loneliness, trapped in a body that couldn't do what theirs could.

"I've always seen myself as fiercely independent, so being restricted by a body that didn't support that independence was really hard."

"Winston didn't let his physical limitations prevent him from chasing his dreams, and his parents didn't treat him any differently to his sister, Mariam.

He made his parents proud when he graduated from university with a degree in computer science in 2009 and spent the next 10 years working as a consultant for a global tech corporation before trying his hand at motivational speaking.