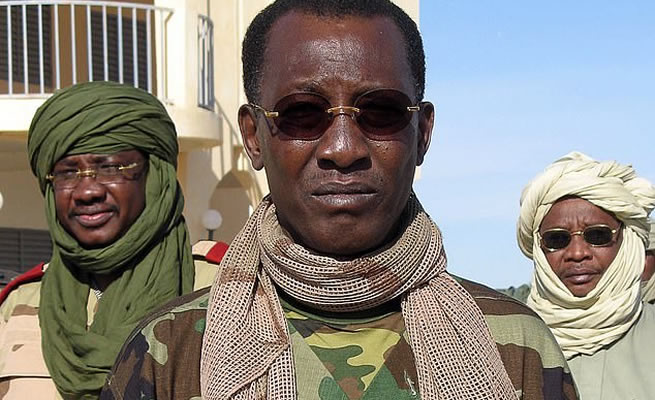 The president of Chad has been killed while fighting rebels on the front line just hours after winning a sixth term.

Idriss Deby, who ruled over the central African nation for more than three decades, 'breathed his last defending the sovereign nation on the battlefield,' an army spokesman said today.

The 68-year-old had travelled directly to the front after winning in a landslide on Monday, an election which had been boycotted by his rivals.

Details were still emerging on Tuesday of what happened to Deby, whose forces have been battling insurgents Front for Change and Concord in Chad (FACT), which is headquartered across the northern border with Libya.

The group suffered a heavy defeat over the weekend, according to the Chadian defence ministry.

Spokesman, Azem Bermendao Agouna, told Reuters that army troops had killed more than 300 insurgents and captured 150 on Saturday in Kanem province, around 185 miles from the capital N'Djamena.

Five government soldiers were killed and 36 were injured, he said.

The unrest has raised alarm bells among Western countries, which have seen Deby as an ally in the fight against Islamist extremist groups, including Boko Haram in the Lake Chad Basin and groups linked to al Qaeda and Islamic State in the Sahel.

Deby, who has long faced insurgencies in the north, was also dealing with mounting public discontent over his management of Chad's oil wealth and crackdowns on opponents.

The United States ordered all of its non-essential embassy staff to leave the country on Saturday. The British government had urged its citizens to leave the previous day.

More than 2,000 refugees from the Central African Republic have crossed into Chad in the past week following violence, the UN refugee agency has said.

The UNHCR says the refugees arriving after fleeing clashes between government forces and rebels in northern CAR face difficulties securing food, water and shelter in Chad.

The agency says its ability to provide for the refugees basic needs is "severely constrained" by inadequate funding – with a third of the country's population being affected by country's instability.

"The CAR humanitarian crisis is one of the most underfunded UNHCR operations globally, with only 12% of the $164.7m requirement currently met despite the scale of displacement," says UNHCR.

The country has been plagued by armed clashes between the rebel coalition led by ex-president François Bozizé and the national army supported by the UN mission there (Minusca) and Russian military companies.