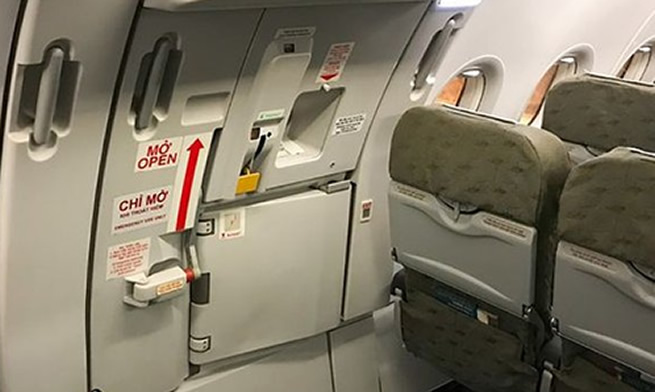 Because of this incident, the whole flight crew was required to steer back the aircraft to the terminal. As a result, the flight had to be delayed for 2 hours.

Recently, the director of Northern Airports Authority, Vietnam, made a penalty decision for a passenger who attempted to open the exit door on an airplane at a domestic airport.

A rare situation happened on Bamboo Airways’ flight QH 1177 that was predicted to depart Tho Xuan Airport located in Thanh Hoa, a northern province in Vietnam for Ho Chi Minh City.

However, after getting aboard and the plane was about to take off, a passenger named V.V.D (59) suddenly pull the handles to unlock the emergence door which immediately activated the evacuation slide.

He said that he didn’t do it on purpose. In fact, he mistook the emergency door for the restroom. The agency decided to levy a fine of $652 on D.

As soon as the incident was shared online, it quickly went viral. Most of the netizens were shocked with D’s action.

"All ignorance must end up costing him thousands of dollars.”

Meanwhile, another Facebook user commented that it can turn out to be a lesson in which all passengers should abide by the rules on airplanes.

What do you think about this incident on the airplane, let us know in the comment section below!