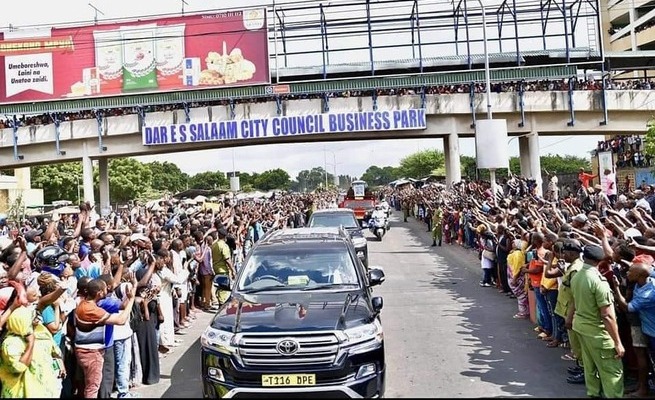 Former President of Tanzania John Magufuli reportedly knew he was a few seconds away from dying and so he spent his last minute on earth leading prayers with doctors and his caregivers at the hospital before taking his last breath, family spokesperson, Ngusa Samike has revealed.

Magufuli was known for his close ties in the religious circle. He often attended Sunday prayers at St. Peter’s Catholic Church whenever he was in Dar es Salaam; this is the same church where his body was taken one last time for a requiem mass.

The late former president was equally close with the Muslim community, helping mobilize funds for construction of mosques and also holding dialogue with Muslim and Christian leaders.

Thousands of mourners have been filing past the coffin of Tanzania's ex-President John Magufuli, who died on Wednesday aged 61.

His coffin, draped in the national flag, is lying in state at the Uhuru stadium in the main city Dar es Salaam.

Opposition politicians say that Magufuli contracted Covid-19, but this has not been confirmed.

He was a Covid sceptic who at times denied the virus had affected Tanzania. Despite the fact that there is a wide belief that the former president succumbed to Covid-19, thousands of Tanzanian citizens may have contracted the deadly virus during the funeral wake of their departed leader as hundreds of thousands of people who were not maintaining any social distancing and were neither wearing masks, thronged the streets with others weeping and sobbing uncontrollably as they paid their last respect to the veteran politician.

Magufuli's coffin was brought to the stadium on Saturday in a procession that was led by his successor, Samia Suluhu Hassan.

It will be taken to several different locations for public viewing before his burial in his hometown of Chato on Friday.

Magufuli was the son of a peasant farmer and went on to became Tanzania's president in 2015.

Some residents wept and threw flowers on the coffin which was pulled by a military vehicle on Saturday.

President Samia, who was sworn into office on Friday, led the government procession in which many wore black or green and yellow to represent the colours of the ruling party.