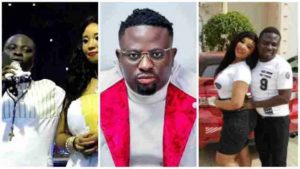 Speaking exclusively on Kofi TV, the self-acclaimed Nation’s Worshipper disclosed that he had to do the odd during his honeymoon to sustain his marriage.

He stated clearly that he licks his wife’s honey pot whenever they are supposed to have intercourse to sustain his marriage from breaking.

This, according to him, is what has helped keep his marriage strong and alive.

However, he said the reason why most musicians have failed marriages is that they act too spiritual in everything including their s. ex life.

Enjoy the full conversation from below: