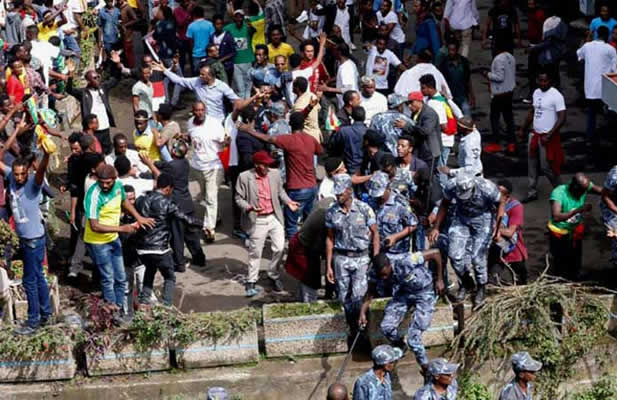 Twenty people appeared in court in the Ethiopian capital on Monday following a grenade attack at a rally for Prime Minister Abiy Ahmed in which two people were killed and scores wounded.

State-affiliated media Fana said those in court included Girma Kassa, deputy police commissioner for the capital. He is among nine police officials arrested for security lapses over Saturday’s attack.

The explosion raised fears of a backlash against reforms instituted since Abiy became prime minister in April. The reforms include releasing jailed dissidents, loosening the government’s grip on the economy and taking steps to improve relations with Eritrea.

Abiy had just finished a speech to tens of thousands of supporters in the central square in Addis Ababa when the grenade exploded. Thirty suspects are being held over suspected links to the attack. Security officials are yet to say who is responsible.

On Monday, the head of Ethiopia’s Federal Police Commission Zeinu Jemal said experts from the U.S. Federal Bureau of Investigation were providing assistance in the capital.

“The aim of their support is to help determine the perpetrators,” he told the Ethiopian Broadcasting Corporation.

U.S. Under Secretary of Commerce Gilbert Kaplan made the offer while talking to Ethiopia’s minister of foreign affairs, Workneh Gebeyehu, on Monday, Fana added.

Abiy has pledged to increase government transparency and reconcile a country torn by protests since 2015. Ethiopia has released thousands of jailed dissidents since the beginning of the year, including members of armed groups.

Abiy has enacted major policy shifts including the partial privatisation of the state-run telecoms monopoly and state-owned Ethiopian Airlines.

He has also announced that Ethiopia will implement a peace deal with its neighbour Eritrea that was signed in 2000 after a two-year war. For years, Addis Ababa refused to implement the deal, saying it wanted more talks.

A delegation from Asmara is expected to arrive in the Ethiopian capital this week in a bid to resolve one of Africa’s most intractable military stand-offs. [nL8N1TR1GA]

Ethiopia has one of Africa’s fastest growing economies but opponents of the ruling EPRDF coalition that has ruled since 1991 say its benefits have not been shared fairly between the country’s ethnic groups and regions.

Mnangagwa claimed it was his "normal enemies" trying to kill him. Chiwenga called the attack an "an act of terrorism", while agriculture minister and former Air Force of Zimbabwe commander Perence Shiri warned that the people behind the blast were "playing with fire".

As official claims were met with scepticism and doubt in some quarters of the Zimbabwean society, the government also had to come out and deny allegations that it had a hand in the bomb attack.

But many in Zimbabwe now fear that the incident could be used to justify a crackdown on opposition and perceived "enemies" of the president. There are also concerns about political freedoms being curbed even more and the electoral process being compromised.

Meanwhile, former Zimbabwe's minister of higher education and a very close associate of former President Mugabe, Professor Jonathan Moyo, who is currently hiding in exile, has strongly urged the United States to also provide FBI agents who can go to Zimbabwe and independently investigate the mysterious bomb which has since killed two presidential guards and left over 41 people injured.