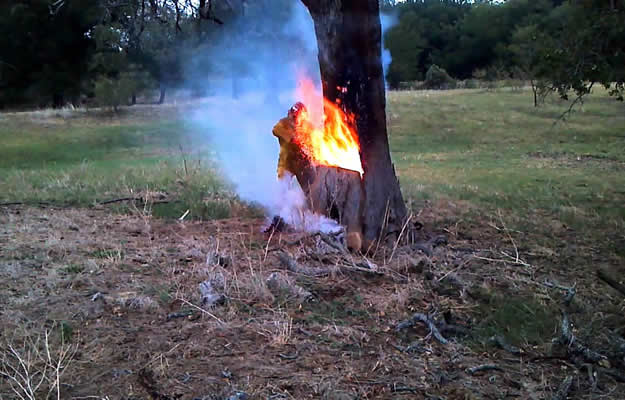 A woman died on Monday night after a tree they had set ablaze in an attempt to kill a snake fell on her and killed her instantly.

A witness Kelvin Kunze said the now deceased, Loveness Muchadakuenda (33) of Vigira farm in Mvurwi, northen Zimbabwe, was about to be attacked by a snake which later climbed up a tree near her hut after fellow farm workers came to her rescue.

The incident happened at around 3pm and with the help of other villagers, Muchadakuenda set the tree ablaze in a bid to scare away the snake, suspected to be a black mamba, which the witness said was a common site to the farming community that lied under the foot of a mountain.

"The snake wanted to attack her (Muchadakuenda) and she was rescued by the other villagers," Kunze said.

"They attacked the snake and it fled and climbed up a tree near the deceased hut. This forced the deceased to set the tree a blaze to scare it aware."

But Kunze said the snake miraculously disappeared and at around 8pm, the deceased decided to set off the fire.

"She went into her hut to get a bucket of water to put off the fire. Just as she came out, the tree unfortunately fell on her and she died instantly," Kunze.

"We are yet to receive that case at our office as soon as we get it you will get it," said Masikati.

The corpse has been sent to Mvurwi mortuary for safe keeping.

Kunze said the incident has left the villagers in awe and they suspect some witchcraft as the women who eventually died by the snake the mysteriously disappeared was killed by the tree the snake climbed in.