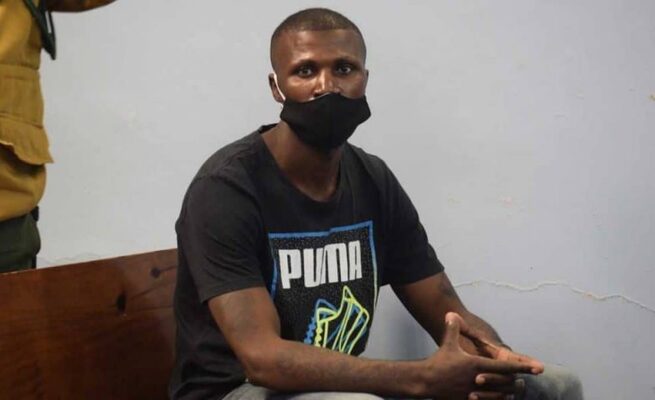 In a rather shocking development, a Botswana woman who was raped by a Zimbabwean man refused to testify against him but instead asked the police to provide her with his contacts as she wants him to come back for more

Celebgossip has learnt that prosecutors in Botswana were left stunned when one of the rape victims (name not supplied) who was raped by Oscar Chabaya (34) in Botswana refused to testify against him. The lady is alleged to have instead asked the police handling the case to supply her with Chabaya’s contact details as he had sexually satisfied her.

Chabaya this week appeared for his ruling before an Extension II Magistrate, Lentlhabetse Willie in Tlokweng facing three counts of rape, one attempted rape, two robberies, and one common theft three years ago.

However, one of the victims refused to appear in court and testify against Chabaya, instead telling the police to find his cell number as he had satisfied her when he raped her in 2017.

Chabaya’s rape spree is alleged to have started sometime in March 2017, where he would gain entry into his victims’ houses through windows left open. Once inside, he would search the house for cell phones before raping the victims without protection.

According to the state, Chabaya targeted tertiary students under the age of 24 before breaking into their homes at night to rape them. He would tell his victims he was good in bed and they would call him begging for more.

Before raping his victims, Chabaya who was always armed with a knife is said to have toyed with the women.

He was only arrested in April 2017 – after police matched his DNA to an earlier robbery case in which he cut his hand on a gate when making his escape.

However, in spite of the other lady’s refusal to testify against him, the state had proved beyond a reasonable doubt that the sexual intercourse occurred without the victims’ consent.

In convicting Chabaya, Magistrate Willie said rape cases were on the increase in Botswana and perpetrators like Chabaya deserved stiffer sentences.