Home International News Ginimbi accident: Moana and the other 2 were just crying inside the... 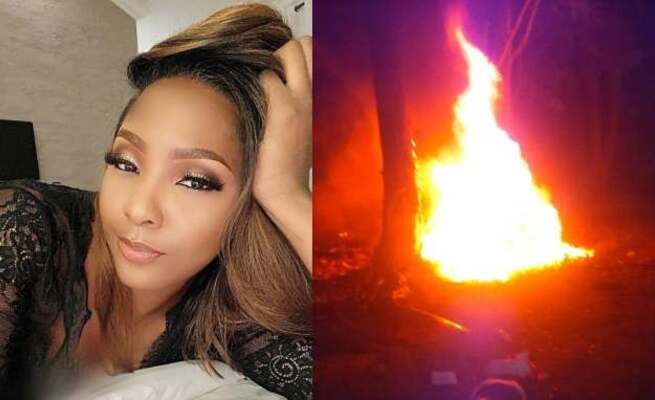 Kadungure was returning home from Ruwa, just outside Harare, after celebrating a friend’s birthday at around 5 AM when witnesses say his Rolls Royce had a head-on collision with a blue Honda Fit on Borrowdale Road.

The Rolls Royce careered off the road and smashed into a tree before catching fire. Kandungure was thrown off the vehicle and died at the scene along with three friends named as – Karim, Elisha and Moana, who was celebrating her birthday.

The driver and a passenger in the Honda Fit, which suffered damages on the front right side, escaped with minor injuries.

Witness Danny Kuwanga, who was one of the first people at the scene, said Kadungure was speeding.

“It happened in front of my eyes. He was speeding. He first overtook me and as he tried to overtake a second vehicle, that’s when he crashed into the Honda Fit driving the opposite way,” Kuwanga said.

Kuwanga said he was joined by three other men and they pulled Kadungure away from the vehicle which was now a fireball.

“The three girls didn’t make it out. They were just crying inside the burning car. We couldn’t do anything,” he added.

As he gets into the vehicle, Kadungure tells his followers he’s “d

riving Rolls Royce Wraith.” The video cuts out as ‘Hello’ by Kabza de Small and DJ Mapholisa blasts from the US$500,000 motor.

The social media star and owner of Dreams nightclub, known for showing off his top-of-the-range sports cars and palatial home in Domboshava, was a cousin of Vice President Constantino Chiwenga’s estranged wife, Mary Mubaiwa.

Over the last two years, Zimbabwean authorities have investigated Kadungure for tax evasion and smuggling of liquefied petroleum gas worth millions of dollars.

During the inquiry, police also seized a Bentley and then later a Ferrari after the Zimbabwe Revenue Authority said he underpaid duty. The Bentley is still with police