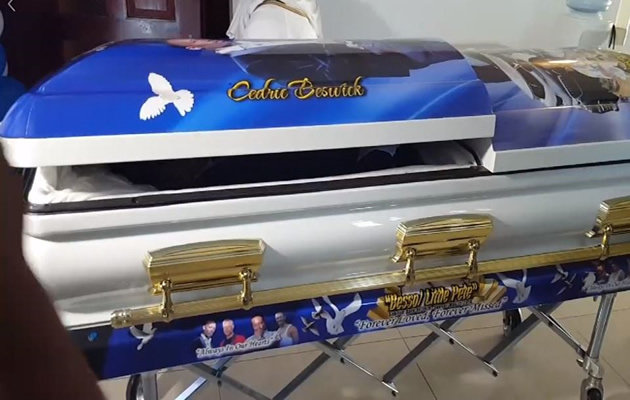 It was the funeral of Cedrick Beswick, also known as Little Pete.

WARNING: Video not for sensitive viewers!

The people of Jones Funeral Home and Supplies made sure that he received a dignified send-off.

They even included a remote-controlled coffin.

Jones Funeral Home and Supplies, a funeral parlour located in Kingston, Jamaica, posted a video of the automated coffin on their Facebook page on Monday.

“The remote opening casket done by us,” the caption reads.

“We shelled it! We deliver! We nailed it! We are extraordinary! We will always go beyond your expectations.”

The post also included a remote control which was used to bury Little Pete in a big way.

Facebook users were highly impressed, and did not hesitate to show it in their comments.

“This one here is the casket of the century,” commented Subaru Sonjohn.

Some, however, were critical.

“A waste of money, ‘cause he’s going in the ground regardless,” said Tanyasia Gibson.

WARNING: Video not for sensitive viewers!