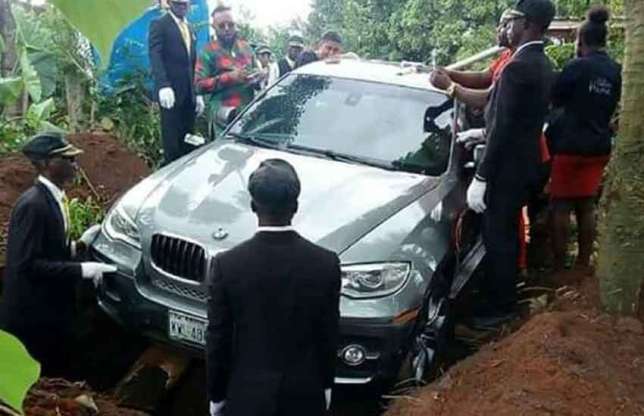 A Nigerian man has reportedly left residents of Ihiala local government area in shock after he buried his father in a brand new BMW.

The picture of the burial has since gone viral on social media. It shows people gathered around to witness the event.

According to Naij, the man only identified as Azubuike, lost his father recently and decided to honour him through burying him in "a luxurious car that would be used as a coffin".

Following the incident, a number of people took to social media to express their views.

Many Nigerians on Facebook were furious with the rich man, stating that he is making a mockery of his father while others noted that he should have used the money to develop his village.

Sifiso Inno Makhashila said": "Buy the Car for your parent while he/she is alive if u are moneyed n burry them with a decent Coffin this is just being foolish n showing off."

ObieNice Mohale wrote: "This is the the thing that keeps us poor as black people."

Wrote CalVin Cal DlaMean: "Insanity and selfishness regardless the fact that its your cash…