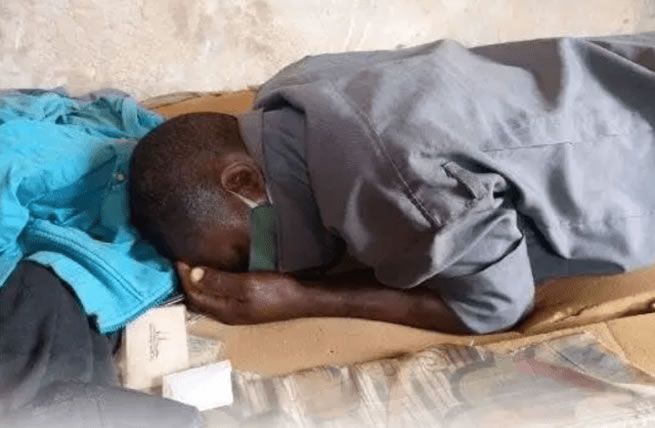 Solomon Ede was in the habit of never failing to wear his face mask in order to protect himself against the dreaded coronavirus otherwise called Covid-19. At bedtime every night, he would usually remove the loose-fitting piece of protective cloth. Penultimate weekend, however, he made a costly error that sent him into an early grave.

On Friday, August 28, the 50-year-old private guard popularly called Baba Rita and attached to a building in Alako area of Abeokuta, was said to have gone to bed without removing his face mask shortly after he took a local gin popularly called ogogoro.

His lifeless body was found face down with his face mask the next day, suggesting that he died of suffocation from the face mask.

Sources revealed that neighbours who came to fetch water at the compound of the house where the deceased worked as a guard until his death banged on the gate of the building endlessly but Ede did not come out to grant them access to the tap.

It was said that the noise at the gate of the building alerted Ede’s boss who opened the gate for the visitors and decided to check on Ede in his room, but the door to his room was firmly shut. His boss then forced the door of the apartment tucked inside the security house of the building open only to find Ede lying face down on the bed lifeless and with his face mask in place.

The boss was said to have raised the alarm which attracted other residents to the building, with many blaming the deceased’s tragic death on his obsession with alcohol.

The news of the guard’s death triggered emotions as sympathisers had a hectic time consoling his widow, who had rushed to the scene on receiving the news of her husband’s death.

It was said that the expectant wife of the deceased’s boss was shell-shocked and almost passed out at the scene but for the quick intervention of female sympathisers who took her away.

A source said: “But for the noise from those who came to fetch water in the early hours of the day, no one would have known that a tragedy had occurred.

“It was when the deceased failed to come out of his apartment to attend to those fetching water in the premises of the house that his boss came out and discovered his body.”

Shocked by the discovery, the unnamed Ede’s employer reported the matter to a police division at Kemta, Idi Aba.

Sources said the deceased was recently persuaded by his boss to open an account in a bank for the purpose of receiving his salary, following the way he was lavishing his money on alcohol.

A neighbour who spoke in confidence said: “Earlier on the day of his unfortunate death, his employer reminded him of their previous discussion about opening a bank account so he could be paying his salary into the account without delay, especially when he is out of town.

”He was to be paid his salary same Saturday his lifeless body was found in his room.”

Some sympathisers revealed that Ede took to alcohol after suffering depression. He was said to have been warned by his employer and residents of the neighbourhood many times to desist from excessive consumption of the local gin.

“He usually removed his face mask before going to bed. But he took some ogogoro late in the evening and was downcast. Those who saw him at the entrance of his apartment asked him to remove the mask on his face and go to bed, but he refused.

”However, he went to bed forgetting to remove his face mask and slept face down. He was probably choked to death by the face mask,” said a source who spoke in confidence.

The source added: “No one would believe that he started working as a guard in the building in March this year, because he was a likable fellow who related with everyone pleasantly. Hence, he had unhindered access to his boss’ apartment.

“He was a very easy going man, only that he could not restrain himself from indulging in the consumption of local gin which eventually led him to wear a face mask to bed, leading to his death.”

A resident identified simply as Olamilekan disclosed that the deceased had rebuffed those who pleaded with him to retire to bed when he was discovered to be drunk.

“He was sighted on Friday seated at the entrance of his apartment at the security house where he worked. He was looking downcast and was asked to go into his room but he refused. It was shocking that he died overnight.

“From the look of things and without prejudice to police investigations on the cause of his death, he was so drunk and probably forgot to remove his face mask before sleeping face down and suffocating to death.”

Policemen from Kemta Police Division in Idi Aba were said to have evacuated the body of the deceased to the mortuary at the State General Hospital at Ijaiye, Abeokuta.

The spokesman of Ogun State Police Command, Abimbola Oyeyemi, a Deputy Superintendent of Police (DSP), promised to revert to our correspondent when he was contacted on the phone.

He said: “I haven’t heard about the incident, but I will confirm the story from the Divisional Police Officer (DPO) in charge of Kemta Division and get back to you,” he said.

He, however, had not done so at press time. NIGERIA