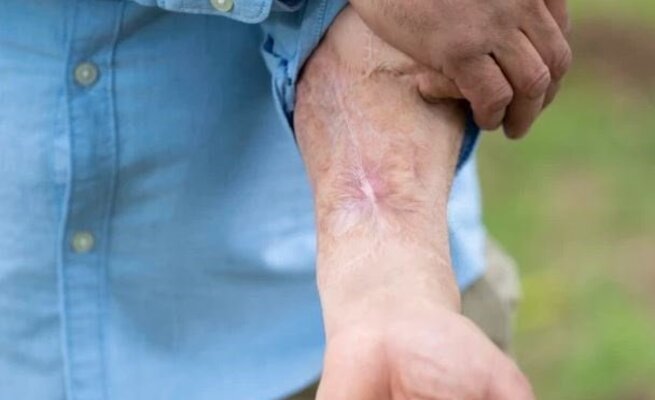 Malcolm MacDonald has a penis built on his arm.

Malcolm MacDonald (45) from England lost his penis to a horrific blood infection.

He has since become the first man in the world who got a new one built on his arm.

Malcolm suffered from a long-term perineum infection which developed into sepsis, turning his fingers, toes and penis black.

In an interview with The Sun Malcolm said: "I had struggled for years with an infection in my perineum, but I had no idea what could happen. It spread to my fingers and toes and turned them black. When I saw my penis go black, I was beside myself. It was like a horror film. I was in a complete panic. I knew deep down it was gone and I was going to lose it. Then one day it just dropped off on to the floor. Because I had been through the devastation of knowing I was going to lose it, I just picked it up and put it in the bin.

Now thanks to modern technology and medical surgeries, doctors were able to build Malcolm a new penis that was attached to his arm four years ago.

He is desperate for a new medical procedure that costs 50,000 Pounds, to transfer the penis to where it needs to be.

"It looks like something out of a weird sci-fi comic. But it&rsquo;s my chance at a normal life," said Malcolm.

For now, he wears long sleeve tops to hide his penis dangling on his arm and has nicknamed his penis Jimmy

Malcolm hopes to have this procedure done before the end of the year.