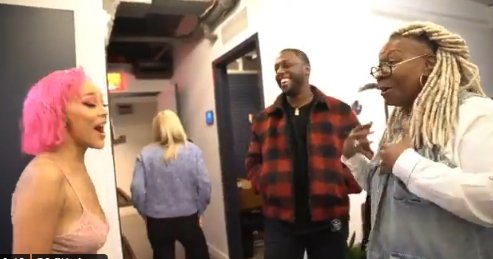 Doja Cat says she has not met her father, who used to comment on her Instagram posts.

On meeting Goldberg, Doja Cat said she reminded her of her father, who was also in Sarafina.

“Who is he?” asked a clearly chuffed Goldberg, further commenting “a good man, he was a very good man” upon hearing Dlamini was the man in question.

Doja, Goldberg, and Dumisani have been trending since, with South Africans calling on him to make an effort to meet his daughter.

In an interview in October last year, Doja Cat opened up about having not met her father.

“I have never [met him], and he’s on Instagram. And he comments on my pictures sometimes, maybe not anymore, but he did a few months ago. He’s an incredible dancer and great actor, but yeah, I don’t know him very well.

“I guess when I was like 13, I wanted to see him and I don’t know what happened.”

On whether she was open to a meeting with him, she said: “Sure, why not? He’s probably still busy doing stuff,” when asked if she would be open to meeting him.

Watch the full interview below: