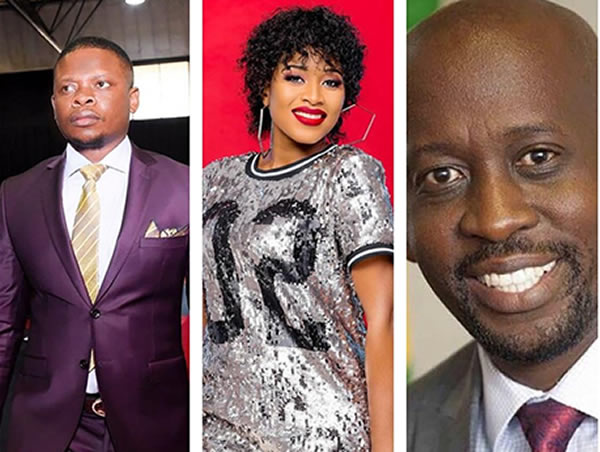 “I will rock up at his church,” said Mukupe in a voice recording.

“I SENT HER MONEY SO SHE COULD FLY TO HIM SO HE COULD F**K HER.”

Terence claimed the prophet had an affair with Rachel Jambaya, known as Rachel J, who allegedly lived with Terence as his wife at the time of the alleged encounters.

Last week, the ex-minister sent heated voice notes on WhatsApp which Daily Sun has in its possession.

He said he was not afraid of Bushiri and would come to South Africa this week.

“There are people who have told me to leave Bushiri alone. I won’t do that. He has never dealt with my kind,” said Terence.

“She said the prophet had asked for it so she could sit in the church,” he said.

He said he thought she was naive but gave it to her.

“It’s not in my nature to respond to allegations levelled against me,” he said.

“However, it has come to my attention that Terence Mukupe, a disgraced former deputy minister in Zimbabwe, has made false allegations that I’m responsible for his wife’s pregnancy.

“The basis of his allegations are screenshots of chats and messages purportedly between me and his wife.”

He said he was not on WhatsApp or Messenger and had not been for three years. He said he had not travelled out of Mzansi in 13 months and could not have met the woman in Malawi. Bushiri also said the contact number on the screenshots is not his.

“Whoever was speaking to this man’s wife isn’t me.”

He said the Bible teaches to forgive and forget, but those who make defamatory and damaging allegations must face the music.

He said since last year, he had been suing every newspaper that carried fake stories about him.

“Media house after media house have been apologising and paying damages for their lies,” he said.

“I call on Terence Mukupe to respect his wife, his marriage and his children.”

He said Mukupe painted himself in a bad light and opened his wife to abuse.

“I call on him to respect my family and everyone else. These false allegations stay on the internet forever and will harm many lives.”

He said to sue Mukupe and take money from him would be unfortunate.

Rachel J also broke her silence and released a statement through her family.

The statement denied the allegations and says she and the former minister were never married but were living together.

Mukupe was apparently so hurt at being dumped that he attacked Rachel J physically and tried to kill her, vowing that if he could not have her, no other man would.

Rachel J is said to have dumped Mukupe because he allegedly fathered four children with other women while they were together.

“As you know, Terence Mukupe relies on unseemly and ungodly false attacks on others to maintain relevance.

“It’s a malicious and desperate attack on Rachel J and our family by a disgruntled individual. He swore if he can’t have Rachel J, no one else will.”

However we failed to get a comment from the former minister who was said to be in Mzansi at the moment.

Yesterday, Enlightened Christian Gathering spokesman Ephraim Nyondo told Daily Sun the claims were malicious and they did not take them lightly.

“You can check the prophet’s statement for comment,” he said.