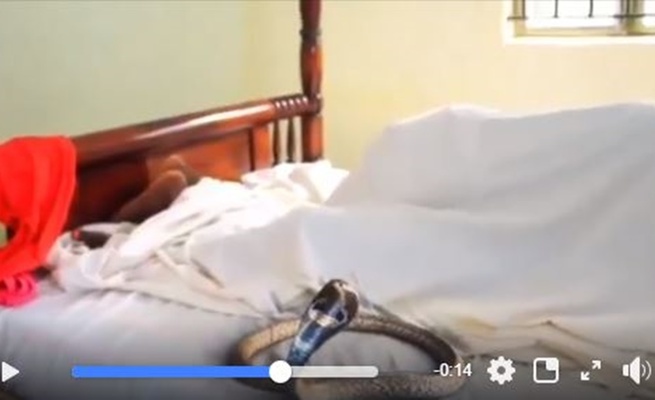 Man Gets Stuck On Married Woman & A Snake Appears To Prevent People From Separating Until Husband Appears?

Undated bizarre footage of an identified man who got stuck whilst enjoying the forbidden fruit with a suspected married woman has wildy gone viral on social media.

According to unconfirmed reports reaching iHarare, the woman appearing in the video was ‘fixed’ by her husband without her consent, which resulted in the two adulterous lovebirds getting stuck after a candid game of hide your sausage in my cookie jar.

In the 60-second long video, people scramble to take videos and photographs of the pair who are covering themselves with a thin blanket to preserve their modesty. More shockingly, an angry Cobra snake is lying on one side of the bed with its head raised and seemingly ready to strike. It is alleged the reptile mysteriously appeared to prevent people from separating the couple until the husband was returned.

This publication was not in a position to confirm the authenticity of the viral video and the exact location of the incident at the time of writing.

WATCH THE VIDEO OF A MAN GETTING STUCK WITH A MARRIED WOMAN BELOW :