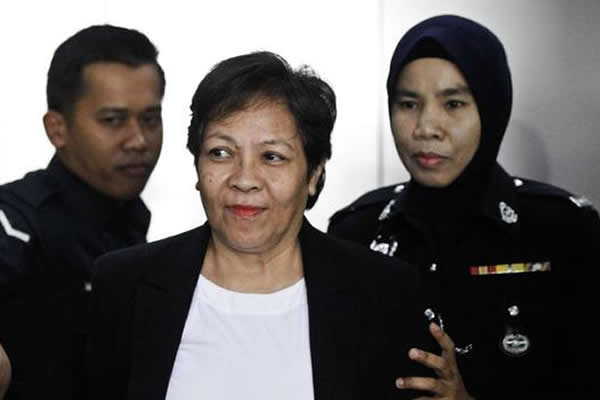 The 54-year-old Australian grandmother had travelled to China in 2014 in hopes of meeting her boyfriend, a man she'd met online years before who claimed to be Capt. Daniel Smith, a US service member. She had fallen deeply in love with him, she said, and flew to Shanghai to at last see him in person. He never showed up.

Upon leaving Shanghai, Maria Elvira Pinto Exposto was approached by a stranger, who asked her to take a backpack back to Melbourne. She said yes. Then, while changing flights at Kuala Lumpur International Airport, she mistakenly went through immigration. She volunteered her bags for custom inspection, according to the Agence France-Presse news service.

That's when officers discovered a secret compartment stitched into the backpack that contained 1.1 kilogrammes of crystal meth. Exposto was arrested.

Then, in December 2017, Exposto was cleared of the charges. It was a rare twist of fate in the Muslim-majority country, where hundreds of people have been sentenced to death in recent years for drug trafficking, officials told AFP.

A Malaysian High Court judge ruled at the time that Exposto wasn't aware she was transporting the drugs and had fallen victim to an online romance scam. She told the court that she had agreed to take the backpack from the stranger because she was told it carried her online boyfriend's clothes.

"He (Smith) made me feel loved, he made me feel wanted," she told the court, according to the Sydney Morning Herald, adding that the boyfriend often sang to her and sent her photos and poems.

Upon her acquittal, she wept and hugged her son.

"I'm happy now that I'm free," Exposto had said at the time, according to AFP.

But prosecutors at the time indicated that they wanted to appeal the acquittal, meaning Exposto couldn't return home to Sydney and to her three grandchildren, as there was a still a chance she could face the death sentence, AFP reported in December.

On Thursday, the acquittal was overturned and Exposto was sentenced to death, according to AFP.

Drug trafficking issues have long strained the relationship between Malaysia and Australia. In 1986, Australians Kevin Barlow and Brian Chambers became the first non-Asians to be executed in the country when they were hanged for heroin trafficking. The New York Times reported at the time:

The foreign reaction to the case of Mr. Barlow and Mr. Chambers has provoked widespread criticism in Malaysia and elsewhere in Southeast Asia, where Government officials said they would not be deflected from their "war on dadah" by Western or international protests when Western lives were involved. Dadah is the Malay word for any mind-altering drug.

Countries in the region, particularly Thailand, Malaysia and Singapore, have introduced stringent narcotics legislation partly in response to growing addiction problems at home and partly as a result of pressure from the United States to curb the flow of heroin and opium from the Southeast Asian Golden Triangle area. When Westerners are caught by the laws, officials in the region say, they cannot expect a double standard to apply.

Another Australian, Michael McAuliffe, was hanged in Kuala Lumpur in 1993 after he was discovered with heroin in his pocket at an airport checkpoint, according to the Sydney Morning Herald.

Last year, Malaysian lawmakers voted to abolish mandatory death sentences for drug offenses and did not execute anyone for for drug-related offenses that year, according to Harm Reduction International, a nongovernmental organisation partly funded by the European Union that tracks of death-penalty laws for drug offenses globally. According to the Cornell Center on the Death Penalty Worldwide, however, Malaysia carried out four executions.

AFP reported that changes to the death penalty have not yet come into effect, as they must be approved by the upper house of Malaysia's parliament.

He called the ruling "perverse," and told AFP that he believed there was "an overwhelming case for the defense." Shafee Abdullah now plans to make a final appeal to Malaysia's top court.

There have been previous acquittals, too: In 2013, Australian Dominic Bird escaped the death penalty after he was allegedly caught with 167 grams of crystal meth.