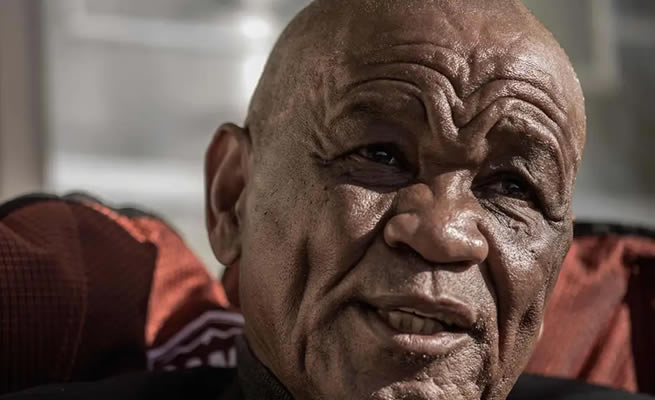 The 80-year-old Prime Minister of the tiny African country of Lesotho failed to appear in court of Friday where he was due to be charged with the murder of his ex-wife.

Thomas Thabane was a no-show at Maseru Magistrate's Court on Friday, a day after police announced he would be charged over the fatal shooting of wife 58-year-old wife Lilopelo in June 2017.

Secretary Thabo Thakalekoala said Thabane had gone to South Africa, but denied he had fled justice and insisted that he had gone for a 'routine' doctor's appointment. Thabane left the mountainous and land-locked country of Lesotho on Thursday night, just hours after police announced their intention to charge him.

On Friday morning, just hours after he departed, his office announced that he will stand down as Prime Minister in July due to his age. Police are now investigating his disappearance, and say that if it can be proved he is trying to escape justice then an arrest warrant will be issued.

Maesaiah Thabane, 42, Thabane's current wife who he married just two months after Lilopelo's death, has already been charged over the killing. Lilopelo was gunned down outside her home in the capital Maseru in June 2017, just two days before he took office and following a bitter divorce battle. Sitting alongside the premier at his inauguration was Maesaiah. He then gave a speech during which he described the death of his wife as a 'senseless killing'.

Police said Thursday that the premier is suspected of 'acting in common purpose' in Lilopelo's murder. Her death shook the tiny mountainous kingdom of Lesotho, which is entirely surrounded by South Africa. Police investigations found that communications records from the day of the murder included Thabane's cell phone number.

"It does not necessarily mean he was there but that he was acting in common purpose," Mokete said.

The Prime Minister's current wife Maesaiah Thabane was charged under the same terms on February 4.

"She was charged under common purpose even though she did not pull the trigger, but people she was acting in consent with pulled the trigger," said Mokete by phone.

Sporting a bright yellow outfit complete with a matching headscarf, she sat straight-faced, next to the prime minister during his inauguration that was held at a stadium in Maseru, two days after the murder.

The long unresolved case had plunged the PM's leadership into question, forcing his All Basotho Convention (ABC) party to ask him to resign. The ABC had given him until Thursday to step aside but he snubbed their deadline, instead saying he will only go by July 31.

"I effectively retire as prime minister with effect from the end of July this year, or at an earlier date if all the requisite preparations for my retirement are completed before then," he said in an address on national radio.

He said the decision to step down 'has been the hardest to make in my over half-a-century career as in the public service. I have been battling with this idea for over a year now'.

"The truth is at my age I have lost most of my energy. I'm not as energetic as I used to be a few years ago. I hope that the remaining months that I will spend in office will afford parliament and my party enough time to work on transitional arrangements," he said.

Thabane's re-election in 2017 had brought hopes of stability to Lesotho, a country with a long history of turmoil.

He first came to power in 2012 as head of the country's first coalition government, formed after an inconclusive vote.

But his second term was rocked by Lipolelo's murder and ructions in the ruling party, buffeting the picturesque kingdom of 2.2 million people.

Opposition parties and many ordinary people in the country also want Thabane gone.

"It defies logic how he still wants to remain in office despite the controversy that surrounds him," said street vendor Malefa Mpobole, 42.

Another citizen, Lenka Ntjabane, 43, said: 'This old man should just go. He should just take his wife and go'.