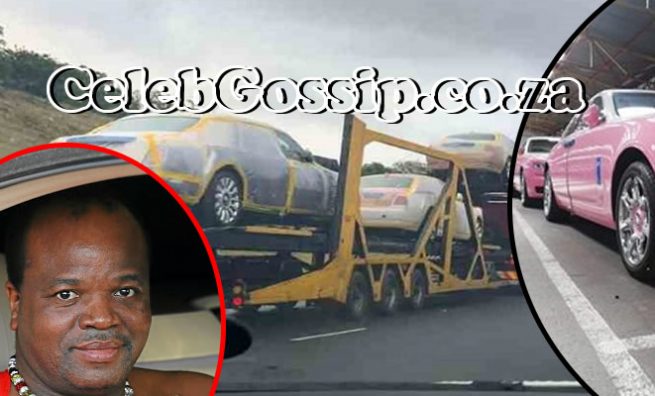 After public servants in eSwatini took to the streets demanding pay increases, King Mswati III has come under fire for "spoiling" his family with a fleet of luxury BMWs.

Formerly known as Swaziland, the monarchy has left opposition party, the People's United Democratic Movement (Pudemo), fuming as it appeared to ignore calls for government employees to be remunerated better, and instead doubled down by ordering 120 BMWs which were delivered on Thursday.

Around 700 public servants rallied in the capital Mbabane on Thursday against the rule of Mswati, whom they accused of draining public coffers.

Latest photos of the 19, R200 million worth Rolls Royce King Mswati III bought for his 15 wives. 53 latest SUVs are are said to be on the way. 0% CoLA for us. @EswatiniGovern1,@LabourSD,@AJENews,@_cosatu,@SwaziDailyNews pic.twitter.com/H5mww22caS

The biggest opposition party in the country, the People’s United Democratic Movement (Pudemo), has since released a statement criticising King Mswati III over the delivery of Rolls Royces. The king had shown his people the middle finger following the delivery of the luxury cars, said the party.

"In Swaziland, public sector workers have not received salary adjustments in three years and the health system has totally collapsed, rendering the poorest of the poor vulnerable," he said in a statement.

"Tertiary institutions have also closed down due to student unrest caused by the regime’s failure to cater for their tuition fees, text book fees, accommodation and other expenses."

Images and videos showing three trucks ferrying numerous Rolls Royce vehicles reported to be for the king's 12-odd wives and other royal family members have gone viral on social media. According to reports, each of the vehicles costs between R4 million to R10 million.

The delivery of #KingMswati 79 brand new BMWs for his wives 🤫 pic.twitter.com/uoDuO4Qcr7

"Notwithstanding the outrage of Swazis over the purchase of the Rolls Royces, the King Mswati led government continued rub salt into the gaping wound suffered by people by purchasing a further 120 BMWs and 30 motorbikes," said Dludlu.

"He is basically showing them a middle finger and proving to all and sundry that he is a law unto himself and not at all concerned about the people’s concerns. As Pudemo, we strongly condemn in the strongest possible terms this brazen looting of the oppressed people of Swaziland’s hard earned taxes by Mswati," Dludlu added.

Dludlu accused Mswati of continuing to "spoil himself and his family", seemingly oblivious to the problems afflicting citizens.

"Last week, a total of 19 Rolls-Royce cars were delivered to Swaziland for the exclusive use of the king, his mother and his wives," he said.

Dludlu alleged that the new BMWs were for the exclusive use of the royal family, which includes 15 wives and 23 children.

"According to reports, some of these cars are for his motorcade and the exclusive use of his children. To say this is a blatant display of arrogance and total disregard of the poor people of Swaziland’s feelings by the monarch would be an understatement," he said.

"He is basically showing them a middle finger and proving to all and sundry that he is a law unto himself."

First batch of luxury BMWs arrives today. Is there any Moses of the biblical times here or we only have populists and cowards. pic.twitter.com/RmbYAbhN2h

TimesLIVE has reached out to the royal family for comment and will update the story if they respond.

He urged citizens to "stand up and face up to this evil regime that continues to keep us in bondage".

Just spotted these on N2 northbound. On their way to Swaziland for King Mswati’s wife pic.twitter.com/nVWyd4Onql

"Under no circumstances can we allow one family to continuously condemn us to poverty. It is about time that we fight back and reclaim what rightfully belongs to us. This has been going on and has emboldened the regime and we must fight back," said Dludlu.