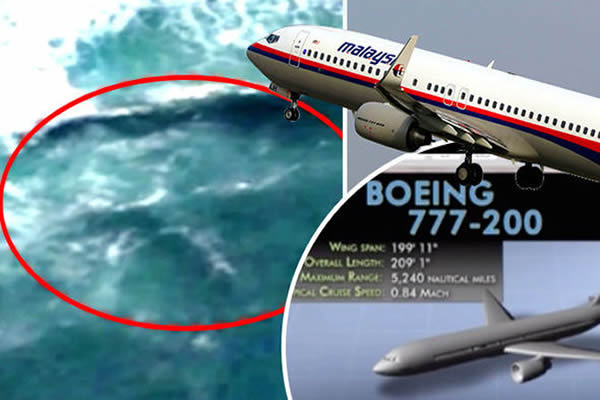 A LEADING aviation expert has claimed the pilot of the doomed Malaysia Airlines MH370 flight intended to kill everyone on board – and has a photo to prove it.

Christine Negroni rubbished recent claims that pilot Zaharie Ahmad Shah tried to land the MH370 plane in the Indian Ocean softly. Mrs Negroni pointed to crucial evidence that the wreckage of the Boeing 777’s wing flaps were retracted at the time of the crash in March 2014.

That would mean the plane was not under full control when it crash laded – rubbishing a bombshell theory set out by former Canadian air crash instigator Larry Vance.

Mr Vance claimed during an interview on Australia's 60 Minutes earlier in the month that Shah had cruelly attempted to keep the plane in one piece – meaning everybody on board would perish, but he would avoid creating debris that would aid search attempts.

Shah flew off course on a suicide mission and planned to kill himself and the 238 others on the journey from Beijing to Kuala Lumpur, it was claimed.

Mr Vance said: “He was killing himself; unfortunately, he was killing everybody else on board, and he did it deliberately.”

Setting out his argument in his new book MH370: Mystery Solved, Mr Vance suggested Shah wanted to leave as little trace as possible, in a final act of malice.

But Ms Negroni has rubbished his conclusions as “preposterous” and “absurd” and used the photos to prove her point.

In a post on her website following the show, she said: “Ladies and gents, thanks to 60 Minutes, pilots Vance and Hardy are in the cockpit.

“They've fuelled up with alternative facts and are taking us on a flight to the absurd.

“Will we ever return from this remote region of reality? Stay tuned.”

She slammed the show of airing “far-fetched”, “hokum” – especially in regards to the wing flap suggesting a controlled landing.

She referenced an October 2017 report by the Australian Transport Safety Bureau, which said: "It was established from the debris that the aircraft was not configured for a ditching at the end-of-flight.

"Analysis indicated that the flaps were most likely in a retracted position at the time they separated from the aircraft making a controlled ditching scenario very unlikely".

The private search for missing flight MH370, which vanished more than four years ago, will end next week.

Malaysia's new transport minister said the search for Malaysia Airlines flight MH370 by a private US firm will end on Tuesday next week and there will be no more extensions.

Houston-based Ocean Infinity has been searching for the aircraft that disappeared en route from Kuala Lumpur to Beijing on March 8, 2014, with 239 people on board.

It's one of the world's greatest aviation mysteries.

"This morning I raised this in cabinet and agreed to extend to May 29," Anthony Loke told reporters.

Asked if that meant no more extensions, he said: "Yes."

All that has been found so far of the ill-fated flight is a handful of parts, such as part of a wing, washed up on remote islands across the world.