Home International News Woman found dead with a snake wrapped around her neck: There were... 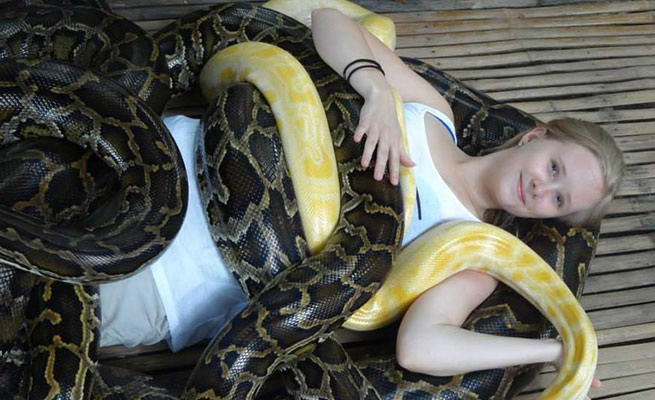 The snakes lived in a small blue house in Oxford, Indiana – 140 of them in all.

Indiana authorities described it as a "reptile home." No one else lived there, but Benton County Sheriff Donald Munson lived next door, property records show. He owned the reptile home too, and owned the collection of snakes inside, he told the Lafayette Journal & Courier.

The sheriff frequently checked on the reptiles, but on Wednesday he made a startling discovery: an eight-foot-long python – wrapped around a woman's neck.

The woman, identified as 36-year-old Laura Hurst, died Wednesday night after the snake apparently strangled her, the Indiana State Police said Thursday. Medics who responded to the scene "attempted life saving measures" but could not revive her, state police said.

Hurst owned about 20 of the snakes inside Munson's reptile home and had apparently come to check on them, Sgt. Kim Riley, a spokesperson with the Indiana State Police, told WTHR. When she arrived, she must have taken out the reticulated python, Riley said.

"What happened after that, we are still trying to figure out," he said.

Munson could not immediately be reached for comment Thursday night, but told the Journal & Courier that Hurst's death was a "tragic accident with loss of human life." He added that he was cooperating with the state police, but did not elaborate on the snake operation at the one-story ranch home.

Both Hurst and Munson were longtime snake lovers. An attorney for Hurst told the Journal & Courier the snakes were even part of her divorce negotiations.

"She had a real passion for snakes," the attorney, Marcel Katz, told the newspaper. "That was a big issue for her."

It's unclear what permits may have been required for Munson to keep the dozens of reptiles there, or what he was doing with them. Riley told the Associated Press the house had been renovated to house the snake collection, and that the reptiles were stored and caged properly.

In 2001, when Munson was a deputy at the Benton County Sheriff's Office, the Journal & Courier wrote about Munson's snake collection when he brought one of them to the local elementary school his daughter attended.

That year, teachers at his daughter's school had made a bet with students that if they met their reading goals, teachers would agree to hold a snake – a 13-foot python named "Simba." Munson said at the time that it was one of 52 snakes living in his garage, saying he bred them for sale.

It's unclear if that is still the purpose of Munson's large collection.

The state police said that an autopsy will be performed on Hurst on Friday to determine her official cause of death.