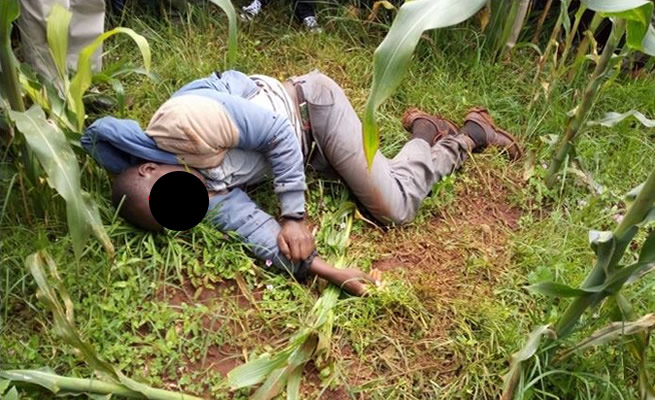 Residents of a village in Uasin Gishu County woke up to a rude shock on Monday after a 35-year-old man died in mysterious circumstances while having sex with a 50-year-old widow.

The man, who has been identified by authorities in Kenya as Julius Kiptoo, is said to have been on a drinking spree until late night at a local bar on Sunday at Sachangwan near Eldoret International Airport before hooking up with the woman whose name could not be immediately established.

When the Nation team toured the area on Monday morning, shocked residents were trooping to a maize plantation where the duo was having their romp to view the lifeless body of the young man.

The woman narrated to detectives who arrived at the scene how the young man became obsessed with nonstop sex after swallowing a sex booster pill.

"We were headed to the house but he became impatient and demanded that we do it at the maize plantation. However, he started becoming sick in the process before dying instantly," said the visibly shaken woman who has grown children.

She said that she later called neighbours who confirmed that the young man, who does menial jobs in the village, had died.

Police from the nearby Kiambaa Police station who arrived at the scene moved the body to the Moi Teaching and Referral Hospital (MTRH) Mortuary.

The woman was on the receiving end from irate villagers who blasted her for being a bad example to young women in the village by moving with younger men.

"This is very embarrassing. We look up to such women for guidance but they are the ones spoiling young people," said Susan Jerotich, a resident.

Ngeria location Chief Mathew Arusei cautioned the youth against engaging in irresponsible activities instead of focusing on improving their welfare.

"We will soon carry out a massive crackdown against bars selling alcohol to minors and those operating beyond the stipulated time," said Mr Arusei.

Residents decried rampant sale of illicit brews in the area and accused authorities in the region for sleeping on the job.

They said this has led to many broken marriages with men abdicating their responsibilities and an upsurge in crime in the area.

"We wonder why such bars continue to be licensed. Some even operate the whole night but nothing has been done," said Jacob Keter, an elder.

"We are losing very productive and innocent people. Our complaints have fallen on deaf ears," added Mr Keter.

They said four people have been killed in a span of three months in the area with a woman being raped recently.