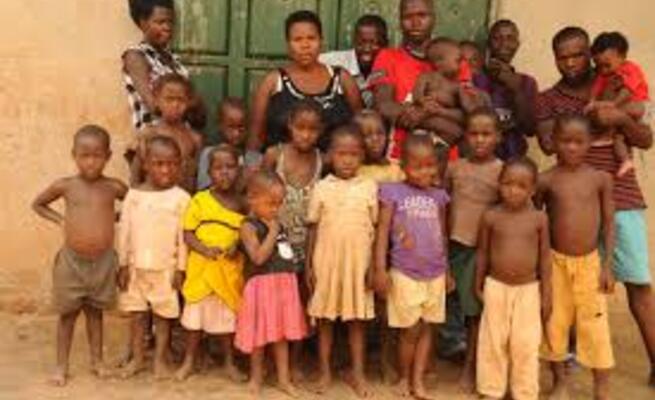 Ugandan woman Mariam Nabatanzi, mothered 38 children despite having had wanted only 6, this makes her one of Africa and the world’s most fertile women.
Mariam a single mom, has given birth to six sets of twins, four sets of triplets and five sets of quadruplets. Of the 44 children Mariam gave birth to, six died from difficulties that often arise in multiple births.
She is now struggling to make ends meet, with such a big family, after her husband walked away from her in 2016.
Apparently, using oral contraceptives is not a choice for her because they trigger a hormonal condition she has.
“All my time has been spent looking after my children and working to earn some money,” Mariam said.
She has become a jack of all trades in order to survive, her errands include hairdressing, event decorating, collecting scrap metal for resale, brewing traditional gin and selling herbal medicine.
Her family consumes up to 25kg of maize meal a day and for her, fish or meat are considered a luxury. Most of her income is chewed up by food, medical care, clothing, school fees and rentals.
Mariam's older children play part in looking after the young ones, everyone has something to do. While she works to put food on the table, the children help with house duties such as cooking, washing and cleaning.
Her eldest son, Ivan Kibuka (23) dropped out of secondary school when she could no longer afford to pay his fees. He plays his part in helping his mother.
“Mom is overwhelmed. The work is crushing her. We help where we can, but she still carries the whole burden for the family. I feel for her,” he said.
Mariam’s early childhood started badly, only three days after she was born, her mother abandoned the family leaving her father, herself, and her five siblings. Mariam said it is sad that her mother left them just like that.
To make matters worse her father remarried but the stepmother was cruel to the extent of killing her siblings by allegedly mixing crushed glass into their food. Mariam survived on the account of have had been away on the day, she had visited a relative.
“I was seven years old then, too young to even understand what death actually meant,” Mariam said. After five years, her father and stepmother gave her away in marriage to a man 28 years her senior.
After her first set of twins at the age of 13, Mariam went to a doctor who told her she had abnormally large ovaries, the doctor told her that birth control like pills might cause her health problems.
After noticing that she might have too many children, at one point Mariam took the risk and used an intrauterine contraceptive device. But she started bleeding heavily and spent six months in hospital as a result.
“The doctor said my hormones weren’t compatible with family planning.” So, the children kept coming,” she told Al Jazeera.
Her family is thought to be the biggest in Uganda, where the fertility rate averages out at 5,6 children per woman.
In her home village of Kabimbiri, people call her Nalongo Muzaala Bana (the twin mother that produces quadruplets).
She said her father had 45 children with different women, and all coming in sets of twins, triplets, quadruplets and quintuplets.
Dr Charles Kiggundu, a gynaecologist at Mulago Hospital in Kampala, Uganda, confirmed that Mariam’s high fertility is hereditary.
“Her case is a genetic predisposition to hyper-ovulate (releasing multiple eggs in one menstrual cycle), which significantly increases the chance of having multiples,” he told Ugandan newspaper the Daily Monitor.
Mariam and her 38 kids live in a set of four cramped houses made of cement blocks, topped with corrugated iron sheets, in a village surrounded by coffee fields few kilometres outside the capital, Kampala.
Twelve of her children sleep on metal bunk beds with thin mattresses in one small room. In the other rooms, some kids crowd on shared mattresses while the rest sleep on the dirt floor.
A duty roster on a small wooden board nailed on the wall shows who does what and when. “On Saturday we all work together,” it reads.
Mariam said the load at one time got too much for, especially soon after her husband abandoned her. As if that was not enough, she had just given birth to her last set of twins and one of the babies had died during childbirth.
“My man put me through a lot of suffering,” she told Reuters; “He was violent and would beat me at any opportunity.”
Setting everything aside, she’s happy to be raising her kids by herself.
“I started taking on adult responsibilities at an early stage and I have grown up in tears. It’s not easy to take care of my children but I made it easy because they are my children. “I will never abandon them. I love them,” she added.

Twelve of the children sleep on metal bunk beds with thin mattresses in one small room with grime-caked walls. In the other rooms, lucky children pile onto shared mattresses while the others sleep on the dirt floor.

Older children help look after the young ones and everyone helps with chores like cooking. A single day can require 25 kilograms of maize flour, Nabatanzi says. Fish or meat are rare treats.

A roster on a small wooden board nailed to a wall spells out washing or cooking duties.

“On Saturday we all work together,” it reads.

Having endured such a hard childhood herself, Nabatanzi’s greatest wish now is for her children to be happy.

“I started taking on adult responsibilities at an early stage,” she said. “I have not had joy, I think, since I was born.”

Expert view
Gynaecologist Dr Charles Kiggundu, refers to Nabantanzi’s ability to conceive so many multiples as “genetic predisposition to hyper ovulate”. He explains;
“It is an increased likelihood of having children in multiples (twins, triplets, quadruplets…) based on a person’s genetic makeup. It results from specific genetic variations that are often inherited from a parent.

In some cases, women ovulate more than one time consecutively, but in other cases they release more than one egg at the same time, leaving room for the fertilisation of released eggs. When that happens, each one develops within its own sac in the womb; hyper-ovulation naturally is hereditary.”

How common it is
I have not seen many of such cases in Uganda; the highest I have seen are twins and one case of triplets, but scientifically this condition is real.

Risks and solutions
The higher the number of eggs fertilised, the higher the risk of losing all children (miscarrying). Going for anti-natal care during pregnancy helps to have the situation monitored closely, doctors can help.

Although a person’s genetic makeup cannot be changed, some lifestyle and environmental alterations (such as having more frequent disease screenings and maintaining a healthy weight) may help ward off opportunistic health problems.

Advice to women
Nabatanzi says a woman is respected by the way she handles her family and having to settle in her marriage containing all that is there since this is her pride.
“There are no easy marriages; women should be patient because even our great grandmothers did not have a smooth one. They should be patient as there is always a lot to deal with in marriage and it is the patience that heals time, mine is to take care of my children which I am doing happily,” she says.
Advice to men
“Do not forget your responsibility because marriage is a joint responsibility to raise these children. “I cry deeply in my heart wondering whether I produced these children on my own.”
She further urges men to stop marrying off their children for quick money and gains as this not only affects them but also their children.