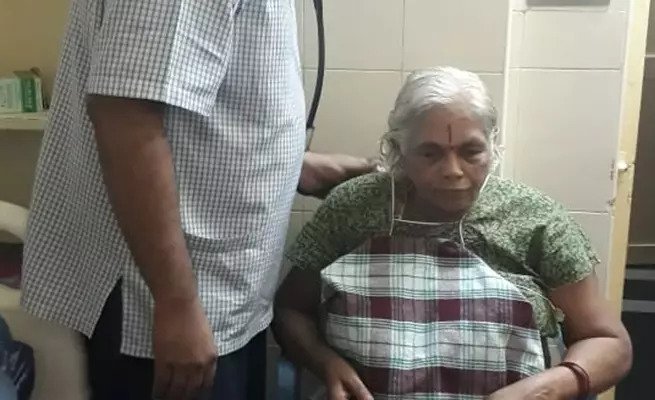 A 74-year old woman gave birth to twin girls, conceived through in-vitro fertilisation, in Andhra Pradesh’s Guntur district on Thursday. Daljinder Kaur of Punjab, had become a firt-time mother at the age of 70 in 2016.

Erramatti Mangayamma, wife of E Raja Rao, 80, from Nelaparthipadu village of Draksharamam block in East Godavari district, gave birth to the twins at Ahalya Hospital in Kothapet through Caesarian section at around 10.30 am.

Mangayamma says not bearing a child had been a heavy burden that she carried all these years. "People looked at me with accusing eyes as if I had committed a sin," she told TOI. "Neighbours would call me 'godralu' (a curse-word for a childless woman). However, my husband stood by me like arock. We are the happiest couple on earth today.

I have now become a proud father of two baby girls," said Rajarao, who distributed sweets at the hospital "I am very happy. After 54 years, God has answered our prayers," Mangayamma said.

“The surgery went smoothly. Both mother and the infants are healthy and have no complications whatsoever. However, the mother has been taken to intensive care unit to come out of the stress she had undergone for the last few hours,” Dr Sanakayyala Umashankar, director of the hospital, who performed the C-section,check told reporters.

Describing it as a rare case, Umashankar said Mangayamma had no problems in conceiving and delivering the babies even at her age because she had no medical complications like diabetes and hypertension

“I don’t think she will have any major health issues in the post-delivery period. However, she cannot breast-feed the babies. But no worries. We can feed the babies with milk obtained from the milk bank,” he said.

Mangayamma and Raja Rao, a Farmer, got married on March 22, 1962, and had been childless for the past 57 years. “She could not succeed in her attempts to conceive even after visiting several hospitals. Even after she attained menopause nearly 25 years ago, she had a strong desire to become a mother,” Umashankar said.

Last year, she came to know about a woman in her neighbourhood becoming pregnant at the age of 55 years through In vitro fertilisation( IVF). “She decided to try the method and approached us. We were surprised at her willpower. We conducted all the medical tests and found that she was medically fit for conception through IVF,” he said.