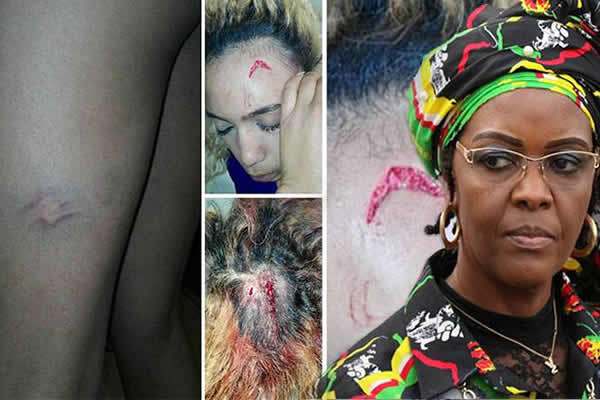 Gabriella Engels, the young woman who was allegedly assaulted by former Zimbabwean first lady Grace Mugabe, said on Thursday she was confident that Mugabe would be extradited so that she could account for the alleged crime.

Engels was speaking inside courtroom 6F at the North Gauteng High Court where an application by lobby group AfriForum against the decision by the Department of International Relations and Cooperation to grant diplomatic immunity to Mugabe is being heard.

In 2017, the 52-year-old wife of former president Robert Mugabe allegedly beat up the model at a Johannesburg hotel where her two sons were staying. Engels told News24 that she was not feeling nervous about the court case.

"I am positive that all will go well today and tomorrow. I am happy that the National Prosecuting Authority (NPA) is taking this matter very seriously and I know that she will come face the full might of the law. I really hope that she comes back to account but I leave it all in God's hands to get us through everything."

Engels said she had made progress in her recovery from the trauma of the event and believes there will be a positive outcome in the matter.

"The trauma and stuff was a bit bad but I am better now."

Engel's mother, Debbie, said she was also optimistic about the case.

Earlier this week, AfriForum said various other institutions had brought similar applications and would join the proceedings as friends of the court.

These are the Commission for Gender Equality, Freedom under Law and the Women's Legal Centre, who were all present in court on Thursday.

"Should AfriForum be successful in having this diplomatic immunity to Mugabe set aside, it will pave the way for the [National Prosecuting Authority] to take steps to ultimately prosecute Mugabe," it said.

Engels said she suffered deep cuts to her forehead and the back of her head.

The alleged attack threatened to spark a diplomatic tiff between the neighbouring countries that have strong political and economic ties.

The former first lady allegedly arrived at the Capital 20 West Hotel with bodyguards and accused Engels of partying with her sons Robert and Chatunga, who are both in their 20s.

Pictures on social media appeared to show Engels bleeding from her head after the alleged assault at the hotel in the upmarket business district of Sandton.

Engels said she had been attacked with an electrical extension cord.

Gerrie Nel, who launched a private prosecuting authority funded by AfriForum after leaving the NPA last year in January, previously announced that the organisation would represent and assist Engels during Mugabe's prosecution.

The DA's James Selfe, who was also in court, said: "There is a great deal that still has to happen. We need to get this diplomatic immunity lifted and insist that she be charged. There will have to be an application by Engels of an extradition order that then must come to court and then they can serve the Zimbabwean government."