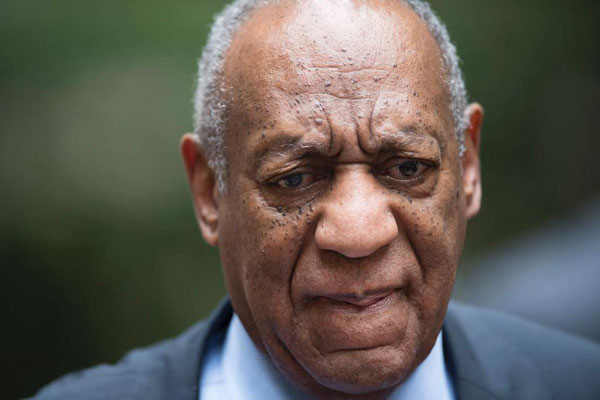 Bill Cosby faced the prospect of dying behind bars last night after he was convicted of drugging and sexually assaulting a teenager.
After the retrial of the 80-year-old TV star once known as “America’s Dad”, a jury in Pennsylvania found him guilty of three counts of aggravated indecent assault against Andrea Constand, a former university basketball star he had mentored.

Each count is punishable by up to 10 years in prison.

The verdict ends years of controversy for the star of the enormously popular comedy series, The Cosby Show, after dozens of women made similar allegations.

Five of them testified at his retrial. Some of his accusers were in court and cheered as the verdict was announced.

Cosby sat back in his chair as he learnt his fate and stared straight ahead. But after the jurors left, he stood up and erupted angrily at prosecutor Kevin Steele’s insistence the millionaire star owned a plane and should be denied bail as a flight risk.

Cosby’s wife of 54 years, Camille, had stood by him but was not in court for the verdict.

The judge ruled he could remain free, wearing a GPS tracking device at his Philadelphia home, before sentencing takes place. His lawyers said he would appeal.

Many have seen the case as the first big legal test for the MeToo movement that sprang up to campaign against sexual harassment after the scandals over Harvey Weinstein and other Hollywood predators.

Gloria Allred, a lawyer for some of Cosby’s other accusers, said justice had been done, adding: “After all is said and done, women were finally believed.”

Some of the women insisted Cosby was protected for decades by an entertainment world reluctant to take on US’s biggest black star.

Janice Baker-Kinney, who claimed he had drugged and raped her in 1982, said she was relieved this “toxic chain of silence has been broken”.

She said she and the other women could move forward with heads held high.

In recent years, Cosby, who as family patriarch Dr Cliff Huxtable had made history by portraying a successful black family on US TV, had admitted to decades of philandering. He also admitted giving Quaalude, a powerful sedative, to young women so he could have sex with them.

His first trial collapsed in June last year after the jury was unable to agree on a verdict. The second jury of seven men and five women took 14 hours to reach their unanimous decision following a 14-day trial. Cosby did not testify in his own defence. He and his lawyers had insisted that his relationship with the then 19-year-old Constand, who had worked for his alma mater, Temple University in Philadelphia, was consensual. His legal team had depicted her in court as a cash-strapped “con artist” and liar who was interested in only one thing: “Money, money and lots more money.”

Cosby’s case was bolstered by Marguerite Jackson, a former colleague of Constand, who testified that she had confided how she planned to frame a celebrity for money.

Constand, a Canadian massage therapist, claimed she had been left comatose and raped by Cosby in January 2004. They had become friends while she was working at the university as manager of its women’s basketball team. He was a trustee of the university and she had turned to him for career advice.

She said he had invited her to dinner at his home and had given her three blue pills to “relax” her.

Cosby claimed he only gave her the antihistamine Benadryl. Constand later took out a civil suit against the star and settled for an undisclosed sum.

During his trial, Cosby’s lawyers had tried to arouse sympathy for him, saying he was “nearly blind”.

He had been “foolish” and “ridiculous” in being attracted to a younger woman but he was no criminal.

More than 60 women have made sexual accusations against Cosby but only Constand’s case resulted in criminal charges.

#IdolsSA Judges hefty salaries revealed – You won't believe how much they earn per...

Celeb Gossip Innoe Malaba - 8 August 2020 0
IdolsSA season 16 is currently airing on our tv screens and the first episode was full of giggles and a fair share of controversy. Celebgossip.co.za...