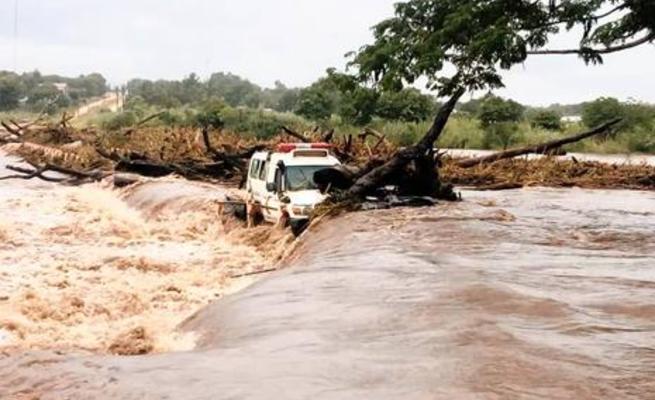 Mozambique is still reeling from Cyclone Idai, which struck the country hard last month, claiming over 1,000 lives across the region. Now a new cyclone is on the horizon, threatening to stretch already thin resources even thinner.

Cyclone Kenneth is chugging from the Pacific toward Mozambique. Currently the equivalent of a tropical storm with sustained winds of about 52 mph, the cyclone is expected to strengthen in the coming days. Cyclone Kenneth is forecast to strafe the island nation of Comoros before plowing into Mozambique’s northern coast on Thursday or early Friday.

The island archipelago of Comoros could actually bear the worst impacts of Kenneth, wind-wise. The storm is expected to top out at 103 mph—the equivalent of a Category 2 storm—early on Thursday as it hits Comoros’ main island. That would make it the first hurricane-force storm in recorded history to make landfall in Comoros, according to data kept by the National Oceanic and Atmospheric Administration.


The 3,000-foot escarpments on the northern end of the island could help weaken Kenneth a bit before the storm strike Mozambique later that day as a strong Category 1 with winds of up to 92 mph. That means Kenneth won’t pack as punch as Idai, which made landfall as a borderline Category 3 storm a little over a month ago. Idai also made a direct hit on Beira, a city of of more than half a million people that bore the brunt of its storm surge and then was cutoff from help for weeks by an inland lake from the storm’s rainfall.

But that’s where the marginally good news comparisons end. There are a number of population centers still in this storm’s path according, to the Joint Typhoon Warning Center’s forecast. They include Pemba, a city of roughly 200,000, and Palma, a small town that’s a hub of liquified natural gas exports. This area has never been hit by a hurricane-force storm, and the last cyclone to make landfall in the region was in 1987. That means thousands of people who have no experience with cyclones are in harm’s way.

As with Idai, rain is also a major concern. The storm is expected to slowly move inland, a recipe for copious rain and flooding. Up to 20 inches of rain could fall according to Bloomberg, totals that are worrisomely in line with Idai’s forecast.

Any people requiring help in the wake of Cyclone Kenneth will have to rely on a support system still overtaxed by Idai. There are still more than 77,000 internally displaced people and the United Nations reports that even a month after the storm, aid workers are finding communities that have been cut off from the outside world. A cholera outbreak fueled by the Idai’s floodwaters has affected more than 6,000. According to another United Nations report released on Saturday, “[m]any interior roads remain inaccessible, as numerous secondary roads were washed away or cut off.”

Kenneth could either require aid agencies to seek more funding and support or target their interventions. While these storms aren’t necessarily being driven by climate change, they do illustrate the stark choices that a warming world will force us to make. They also showcase the brittleness of response systems and governments, particularly in the developing world where there are fewer resources available to prepare for weather disasters and respond afterwards.