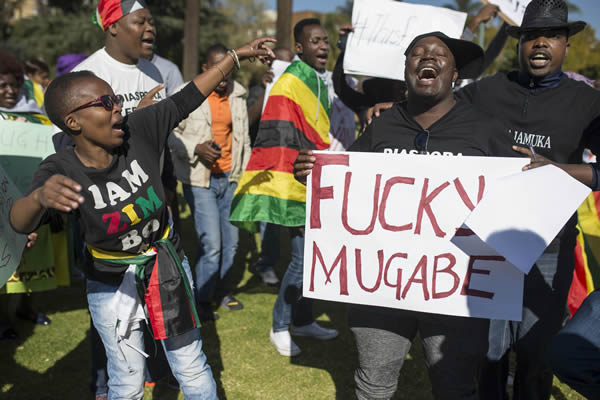 A crowd of Zimbabweans based in South Africa gathered in Johannesburg on Friday at an event marking their country’s belated 2018 Independence Day commemorations at an event hosted by the Consul General Henry Mukonoweshuro.

The Zimbabwean diplomat said the new dispensation ushered in by the removal of erstwhile president Robert Mugabe has presented unlimited economic opportunities for the millions of Zimbabweans who had migrated to other countries, and they are now exploring relocating or investing in their motherland.

“There is a lot of uptake by our own ‘diasporans’, business uptake that is. We are having a lot of guys in various fields travelling back to Zimbabwe as they try inquiring on what prospects they can invest in. We are having them [Zimbabweans] partnering with South Africans, and other people in the diaspora and they are taking them across the [Limpopo] River,” Mukonoweshuro told the African News Agency (ANA).

“We are very happy. I think we are inundated at the embassy in Pretoria, at the consulates in Johannesburg and Cape Town – there are a lot of inquiries that are coming around. We are happy with that influx of investors and enquiries."

He appealed to multitudes of Zimbabweans based in South Africa to play an active role in the rejuvenation of their nation, which previously experienced record-high levels of inflation, a massive brain drain and food scarcity under Mugabe’s rule.

“We are again calling on them [Zimbabweans in SA] not to be bystanders, do not sit on the fence. The president [Emerson Mnangagwa] has called for you to come back home, to come and invest. Take your money across the Limpopo. Get us the people that you have been working with. We need your resource, and Zimbabwe is well endowed with the human resource and I think that is the greatest resources,” said Mukonoweshuro.

Acting Zimbabwe Ambassador in South Africa, Mietani Chauke, said the environment in Zimbabwe has drastically changed, even with the notable removal of the menacing police officers who used to fleece travellers between the Beitbridge border post and Harare.

“There is reduced police presence … the police that are on the road now are those that are required on the roads. It is different from the previous era,” said Chauke.

She said the Mnangagwa-led administration was going all-out to woo its citizens back, and financial investors too.

Marking Zimbabwe’s 38th Independence Day commemoration, Chauke said there has been major positives since the attainment of independence in April 1980.

“There is a lot to celebrate. There is peace and security in Zimbabwe. We should not take for granted the freedom we have, the low crime rate compared to other places. Those are things we have to celebrate. Zimbabweans are renowned worldwide for their expertise,” she added.

“I have been head of the Zimbabwe Exiles Forum which we started in 2004, in South Africa, as Zimbabweans in exile. At present, even if you look back, you will see that we are moving more towards a developmental Zimbabwe, than one that produces people in exile. There are many that are now flocking back to Zimbabwe. Many find that there are many exciting opportunities that are developing in the country,” said Shumba.

He said, however, there was still a long way to go for the Zimbabwean government to repeal the several repressive laws, particularly the country’s draconian Public Order and Security Act (POSA).