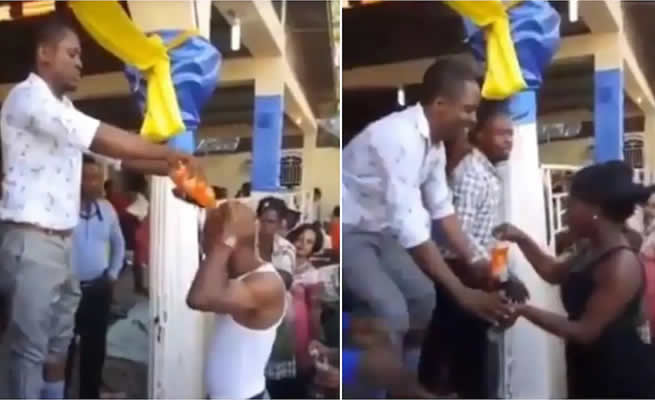 A video of a yet-to-be identified pastor 'anointing' his church members with Coke and Fanta has gone viral.

Twitter user identified as Jackson Ude shared the clip and condemned the act attributing it to the effects of poverty on the populace. He stated that Christianity had become a comedy show for so many.

In the clip, the pastor can be seen standing on a chair and attending to a long queue of members who each had two bottles of soft drinks in their hands which he collects and empties on their heads and bodies.

It is believed that the soda is anointed and used to blessed the miracle-seeking congregation who appeared sold on the idea that the soda was washing away their transgressions and pains.

Just take a look at how some Africans have reduced Christianity to a comedy show. Everything is now used to perform “miracles.” Poverty has consumed our brains we no longer think. We depend on idiots who call themselves Prophets for daily needs including financial blessings. pic.twitter.com/0XXMwLiTQe

The clip which has gone viral sparked a lot of reactions and many Nigerians had a lot to say about the apparent outrageous practice.

Below are some reactions:

Idiots of the highest caliber

You will be so shocked that those bottles of soft drinks cost outrageously, and they will be required to buy them from the "church".

people perish because they lack knowledge.
this is a prophet (Christianity) but a magician