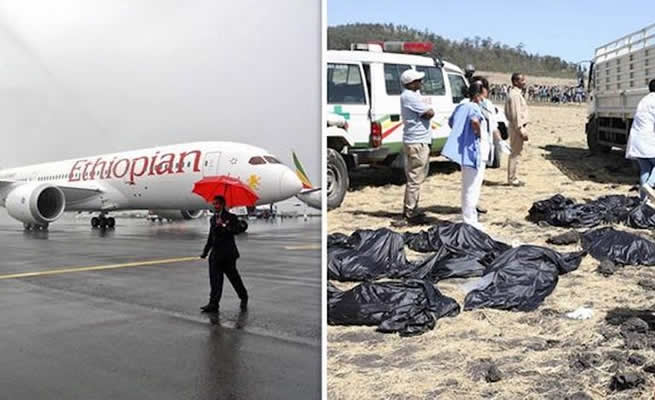 FIVE minutes. That’s how long it took for a panic-stricken pilot to fight against fear to try to save the aircraft in his command. But as the world now knows the battle was in vain: the Ethiopian Airlines

The Ethiopian Airlines disaster and the Lion Air plane that crashed off Indonesia in October last year have stark parallels: Both Boeing 737 Max 8s were new. Both pilots reported problems shortly after takeoff. Both airplanes showed erratic changes in altitude during takeoff. There were signs the pilots were struggling against flight-control systems designed to prevent the aircraft from stalling. It’s believed this system forced the plane’s nose downward. Boeing 737 Max 8 didn’t stand a chance. The crash had eerie echoes to a similar one last year in which a Boeing 737 Max 8 plummeted into the ocean off Indonesia. Now all Max 8s have been grounded – and aviation experts say the planes were a disaster waiting to happen.

Flight 302’s flight recorder was found within days of the crash and sent to France for analysis. Aviation experts said it can take years before the exact cause of the crash is determined, although preliminary findings point to similarities between the two disasters.

Boeing suspended all its 737 Max 8s after mounting pressure from aviation regulators. Russia, China, Japan and Tunisia were among the first to issue the ban and South Africa’s Comair, which owns one of the planes, followed soon after. Four days after the disaster the US joined in, announcing it was taking all 70 of its 737 Max 8s out of service until at least May.

07.41am Captain Yared Getachew (29), a pilot with 8 000 hours of flying experience, sends a panicked request for permission for the plane to turn back after it accelerates to an abnormal speed. Air-traffic controllers scramble to divert two other flights. They report seeing the aircraft lurching up and down – a sign something is catastrophically wrong.

TOO LITTLE, TOO LATE

After the Lion Air crash, Boeing announced it was developing software enhancements for the 737 Max 8 to “make a safe aircraft even safer”. These are meant to be ready by April – a full month after the Ethiopian Airlines crash.

07.42am Controllers clear the plane to return to the runway and the Boeing banks right but climbs higher all the time, swiftly reaching an altitude of 2 620m and a speed of 705km/h. 07.43am All contact with the plane is lost as it enters restricted military airspace.

Even before the Lion Air crash, pilots who had flown the 737 Max 8 complained the plane’s nose sometimes tilted down suddenly during takeoff. They complained they weren’t adequately trained to use the autopilot system, were confused by the anti-stall system and that the operations manual was criminally insufficient.

Six days after the Ethiopian crash, flight-tracking data was released showing the plane swung between climbing, levelling off and diving just before impact – a similar pattern observed before the Lion Air crash.

Experts say the data points to the fact the anti-stall system was to blame – and a screw-like device found amid the wreckage indicates the plane was set to “dive”.

07.44am Flight 302 ploughs into a field near the town of Bishoftu, about 60km from Addis Ababa. An eyewitness reports how it “spun twice before hitting the ground and exploding”. Another says the plane “simply dropped from the sky”. Heartbreaking signs of lost lives are scattered on the ground – shoes, handbags and torn boarding passes.

HOW SAFE IS AIR TRAVEL?

Plane crashes always ignite fear in the hearts of travellers but air travel is still the safest mode of transport: some estimates put your chances of being involved in a deadly crash at about one in 83 million.

These crashes prove a new plane doesn’t necessarily mean a safe plane. This is the first time since the ’70s – when McDonnell Douglas DC-10s were involved in consecutive fatal crashes – that a new model of aircraft has been involved in two such deadly disasters in such a short time.