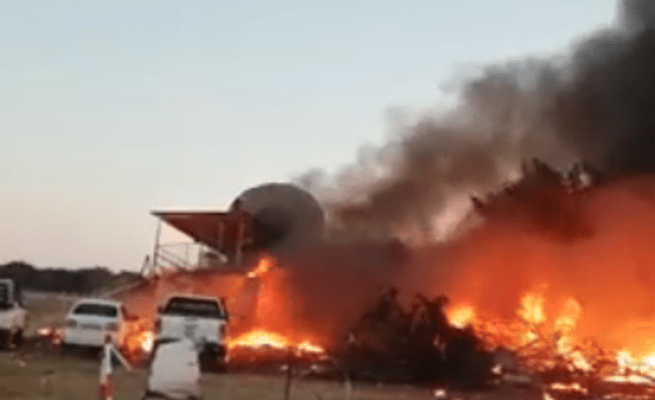 The pilot is believed to have become homicidal after a heated argument, but people were apparently evacuated before he could kill them.

Reports of an airplane crash in the Rasesa area of Gaborone in Botswana were received on Sunday morning, with details about it slowly coming in thereafter.

It is alleged that a privately owned airplane crashed after flying into the club house of the Matsieng Air Strip. Eleven vehicles were reportedly damaged in the crash.

Below is footage of the plane moments before the accident:

Chris Briers of Matsieng Botswana has alleged that a Kalahari Air Services pilot committed suicide in this spectacular fashion, as he was at a party, and allegedly got drunk and into a fight with his wife. He was then asked to leave.

He allegedly then went to the capital, Gaborone, stole a King Air 200 aircraft and flew it into the clubhouse with the intention of killing everyone there, as well as himself.

According to Nari.co.za, paramedics and firefighters attended to the scene in the aftermath of the crash.

While representatives for Botswana’s police force had not yet responded to requests for comment, a source told The Citizen the Air Strip’s owner confirmed the crash.

According to Briers, no one was injured. The pilot, however, lost his life.

The Citizen was sent a voice note, in which a man alleging to have spoken to one of the survivors and witnesses, named in the clip only as “Chris” (understood to be Briers), details what is believed to have happened.

“They had a party at Matsieng, a baby shower, and that’s one of the Kalahari Air Services pilots, and he had a fight with his wife there and he actually hit his wife, and everybody told him to f**k off because you don’t treat a woman like that.”

The pilot then left the party, which was at the Matsieng club house, and, according to the voice note, a noise was later heard and the pilot reportedly phoned a friend at the party, asking where his wife was, after which the friend advised the party guests to run and flee the club house. Then the plane crashed into it.

The person narrating the voice note says it is believed that as many as 50 people would have died in the crash if the club house was not evacuated when it was.